Construction of a Space Mega-City from a Bald Balloon Frame


Over on Orion's Arm, they put out a very cool article on gravity balloons (link also in sidebar nav now). In the process, they just happened to propose a new construction method as well. I had not gone this direction because I thought the asteroid in-situ use is critical for nearest-term viability because it avoids large material movement. That assumption, like all others, can change depending on unknown future capabilities. Not only is the method possible, it's actually more material  efficient due to a roughly 2/3rds power scaling benefit due to decreasing the surface area to volume ratio. In other words, it lets you combine smaller asteroids into one colony which will be more mass-efficient than any of the individual asteroids alone.

Also, there is some amazing eye candy far beyond anything in this blog. The things which look like sesame seeds are broken pieces of asteroids. The balloon is a membrane with a small pressure tolerance, and those rocks are placed (or sprinkled) on evenly so that the pressure is increased through mutual gravitation. The red thing is a specific radiator design. 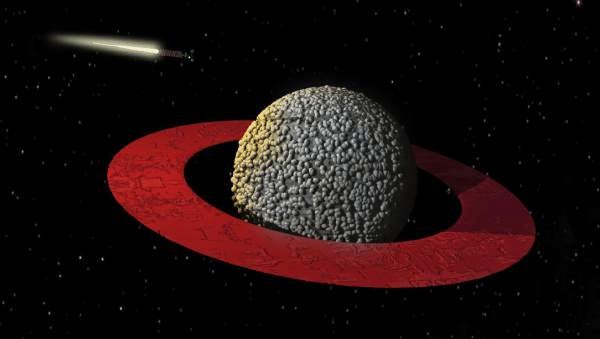 Image and copyright of Steve Bowers at Orion's Arm

Some specific constraints on how you can move the rock material will come up with this method. However, I see two competing frameworks for developing a model. One fundamental constraint would be to avoid any angles larger than the tumbling angle for rocks. Another constraint is that your material strength must be enough to support some curvature due to ballooning out between the rocks. You could use any Platonic solid to create a model of this, although I would prefer to just start with a tetrahedron. Also, I'm not sure if the balloon should be considered to have some linear mass, or the rock placement should form some kind of regular summation. There could be some similarities to the rockfill problem I wrote about, but with even more potential directions. I don't think this would be an easy problem, but that depends on the approach and how the math turns out.

If you consider the balance between the membrane's material strength and the number of trips needed to add the rocks, that forms a very coherent mathematical problem and I would love to have a crack at it sometime.
1 comment:

Impact of Rotating Asteroid on Orientation of Artificial Gravity Tubes

In a NASA Spaceflight forums discussion, I had a new complication pointed out to me that I'm surprised I had not thought to cover on this blog before. The artificial gravity tubes are rotating, but the asteroid is as well. We can distill the implications into 3 options. Either:
Aligning all tubes in the same direction is the most obvious and cheapest option. In the last post on global heat removal, I inadvertently designed this in. If you follow the implications a little bit, that implies that the majority of the heat exchangers are toward the asteroid's poles. This is intriguing because that would be the ideal place for space radiators in the first place. However, if the colony is pushing the spherical black-body limit, then it's not as good because the GEO radiator is toward the pole anyway.

Actually, an ability to precess was already designed into some O'Neil colony designs. With 2 artificial gravity tubes near to each other, they can push and pull so that they change the direction they face. This was proposed as a way to keep facing the sun, which obvious means they turn a full circle roughly every year (depends on the orbital position). For the asteroid rotation, we could be talking about rotation rates of 8 hours or less. Whether the forces involved and the unwanted acceleration on the surface are small enough is a question that is still unresolved.

This is a type of topic which I might return to sometime, but I've decide that I'm going to do a few micro-posts from the long list of things in my backlog where I introduce the subject in a few paragraphs.
1 comment: