Several past posts have been a dump of a large set of topics all balled into one. Now, I would like to do something different. I have used a text file as a staging area where I battled ideas against each other (in terms of where they rank in priority) and also just spitball ideas to see what sticks. While I still like to do these things, I'm depreciating the text file as a tool. I would rather keep the extremely premature ideas on the back of a napkin (or email draft), and use the blog itself as a better format for medium-low effort writings.

Even so, I still have that massive backlog of stuff that I never got to finishing. In my personal philosophy, I want to follow the open source model, and just let information free whenever there's no compelling reason not to. So here it is, my newly retired backlog:

If I'm too wordy in my general writings, then there won't be much of interest in there. Nevertheless, not everything is terrible, and I'm always somewhat taken aback when I read my old writings. It might be nice to polish it up and put it in a nicely displayed format (at least with working links). But let me just go through and dig a few things out of the dredges...


I attacked this concept from several different angles. One specific scale I was interested in was 1 km size asteroids, since these get closer to the NEA territory. Air pressure might still be used to resist against self-gravitation or some other uses, but exactly what is an open question.


Nothing I've posted has come close to an exhaustive accounting of the stability topics which span from the gravity balloon part itself, to the internals, to the friction buffers. Then, multiply some of these by all the different size classes. Every problem you look at, you can probably think of at least five different mathematically simplified cases. Each one of those problems could have an enormous amount of analysis, and even radically different formulations.


The moon of Mars is just too interesting to give up on. But fairly small, and also close to the Roche Limit, this moon also presents a host of different mathematics that can complicate its scenario. In spite of that, there is still a strong motivation to give definite values for some kind of maximally populated colony.


Where does the gravity balloon exist within some kind of space roadmap? There are some efforts to make a detailed space development roadmap (I have one in mind that was on Kickstarter). These can offer an interesting starting place, but may be too near-term to have much connection to gravity balloons. The NSS also has some interesting roadmaps that involve extremely far-reaching development goals. I am interested in making an ordering. What is likely to happen before a gravity balloon is built? What is strictly necessary?


Unlike most artist illustrations and typical guidance from 1970s era concepts, the artificial gravity tubes inside a gravity balloon would be extremely friendly for developers who want to build skyscrapers straight across the tube. In fact, it would be necessary if the mass was not evenly distributed (this is more important for gravity balloons, since the shielding mass isn't integral to the hull, making the livable structures relatively heavier compared to the walls).


Where would sewage processing happen? Probably in tubes that don't have the burden of friction buffers (accomplished by spinning at very low rates). This seems perfectly fine for algae and other smaller and easy to manage husbandry of animals, etc. What other industry (like shipyards) would happen in the microgravity (but not airless) space? Probably lots.

Procurement and Management of Air


I address "air" in the basic physical sense a lot, but the chemical realities of production of air is more challenging.


These topics aren't in that list, because I've only recently been kicking them around:

Given a large number of artificial gravity tubes located near to each other, they all need to fly in formation. A common picture of how to approach this problem is to have many orbital habitats in synchronized orbits. Since their mutual gravity is small, they all essentially trace their own ballistic orbit, and for many orbital locations (like some L4/L5 point) lots of stable non-crossing orbits exist. This does require some station keeping because we can not arrange the orbits with perfect accuracy to begin with.

Another approach is to tie together several cylinders together to create a larger space station. Like many of these deep-future scenarios I write about on this blog, massive structures would be much better off without needing manufactured steel beams with high compression strength. At a glance, working around the constraints to achieve this ideal might sound impractical, but it's actually entirely reasonable. I will address both scenarios of 1.) the superstructure inside of large gravity balloons and 2.) a generic case for orbital habitats in typical vacuum conditions. These are quite different, but some of the underlying principles are the same.

Let's get the first things straight - what specifically the engineering role for a superstructure is.

While this blog might have hit on one or two of these roles, I have never faced them all in any capacity. Elsewhere, I have not seen much of any analysis or reference to the superstructure notion to begin with.

For a small gravity balloon, it might be completely reasonable to pull against a tether anchored into asteroid rock to maintain or start up rotation. On any larger scales, however, you would just use force-exchange with the neighbor cylinders for this task.

Also, let me modify and expand on a statement I previously made regarding wall-connected tethers:


These must be anchored deep into the asteroid rock

Larger gravity balloons will see different physics in this respect. The tethers can be (and likely would be) held in place by the air pressure itself. This will demand some curvature of the wall, as I illustrate in the sketch below.

Going further, there are many many more interesting things that need to be taken into account on larger scales. As scale increases, the self-gravitation effect becomes larger and larger and for something like Virga, you might very need to imagine something like carbon nanotubes in order to keep all the habitats from collapsing in on the center.

For the superstructure concept to work, we need some form of control input. I have made several references to the generic type of technology whereby a tether can have slack pulled in (thus making it tighter) on command. This is the control machinery side of the equation - we also need good control signals. Simply put, on a large enough scale, the system must have more give than what simple material properties would allow you.

As a counterpoint alternative, think about what the superstructure would be like if it were made of springs. This could accomplish most of what a control system could otherwise do.

Momentum will be fully looked at as a commodity in this system. This implies it can be stored and transferred from one place to another as needed. There are large-scale balance equations that will eventually be satisfied, and a gravity balloon would presumably have an agency that followed these numbers (like the various energy agencies are to us on Earth today).

Illustrating what I have in mind - tethers extend from the pressure liner into the habitat. These fork into different directions to connect with the different connection points (and have a curve so they can reach closer to the wall) and also with the rotating cylinders themselves. All throughout the middle space you must imagine a vast number of tubes. Each one of these tubes are connected into the tether network - and the tether network will do the work to hold them safely in place, depending on what the particular needs at the time and location are. 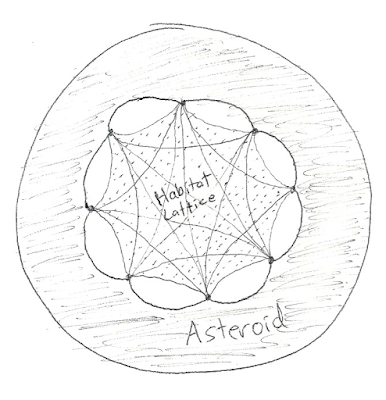 I have drawn an empty space between the tethers and the liner. This isn't strictly necessary because you could just have more tethers connected to the liner. I did not go this route because I assume that additional connections would have an additional cost, but this is not strictly true. So you are free to imagine an innumerable number of tethers extending out from the wall and no "dead space" around the edges. Also, I am burdened by the need to illustrate something.

You must also use your imagination to picture a network of ever-thinner tethers that reaches out to each individual habitat in the entire volume, and connects (eventually) to the superstructure.

In the cases I've described, air pressure is the "ultimate" tension force. That allows you to pull something away from the center. In an arbitrary orbital location, tidal forces might be one of the easily available options. Even a space elevator could be an extreme version of this.

Going in another direction, an orbital ring can be used to pull in another direction. Combining tidal and the orbital ring tug, you could arrange habitats in a 2D plane which is essentially a disk around a planet. This structure could hold all the constituent colonies in place. But let me stress that in the radial directions, "anchors" are needed in order to get a good tug on the tether, while operating on habitats that have relatively small micro-g accelerations acting on them.

These could also be very useful for other mega-structure projects, like solar power arrays, or electromagnetic launchers and catchers. These projects might need precise alignment, and you need something with which to act on in order for them to be viable. The disc-type megastructure might be the ideal option for that.

Another option also presents itself (which I have sometimes briefly hit upon), you could have a large bag of low-pressure air that envelops a large space of orbital habitats just for the purpose of holding the tethers in place and keeping tension on them. This would enable massive 3D habitats, but would not allow free-air access to the different habitats. Since the latter (a full gravity balloon) requires access to a large mass source (a large asteroid), many locations would not have that option and may possibly find a space city of this type the best available option.
No comments: