In their natural state, asteroids are not entirely solid, but reading up on the issue I've been surprised by the degree and distribution of empty spaces inside.  I posted about this on Space Stack Exchange, and obtained some really fascinating information.

For background, micro-porosity describes small voids of the type that we can measure from fallen meteoroids.  Those are to be expected (probably from some bubbling of intermixed volatiles).  Macro-porosity includes voids of large sizes.  How large?  It seems that no one knows.  In the fact of the massive deficit of knowledge, there are huge implications for our future in space.  The most shocking detail I encountered from that above question is this:

"The (scarce) theoretical works on that point predict an internal structure where most of the void are deep inside, while the shell around is pretty-much packed."


This is a fairly direct response to my own question - of how Mathilde can possibly look solid when literally half of it is empty.  No matter how long I stare at the pictures taken by the NEAR Shoemaker, I can't convince myself that there are any particular caves or anything of the like on this scale.

50% is no small fraction obviously.  A 1999 paper in Nature is a good example of what is probably meant by the scarce theoretical work in this subject.  These conglomerations would leave a large fraction of the interior as void, but it's hard to imagine it reaching half.

The mind boggles to transition from this relatively smooth surface to an interior made mostly of space, crisscrossed by boulders the size of American cities.  Would there be openings in the surface to these voids?  It starts sounding like the common sci-fi trope of a hollow planet.

I keep returning to the importance of a number of mathematical details of structural mechanics of self-gravitating bodies.  The fearsome size (about 50 km diameter) of Mathilde is more incredible when you consider that the rock in the center is under constant stress from all that weight and is actually no worse off because of it.  The best model might be something like a gumball machine.  Each gumball is hollow and has to resist the pressures by 3 or 4 other gumballs pressed against its side.  This is the true failure mechanism.  It relies on the overall pressure of the pile, as well as its own size.

In general, the pressure that has to be resisted is the same central pressure that I've been calculating in this blog over and over again.  After all, the voids are literally a vacuum.  Actually, we don't know this for sure, but it's the best assumption we have right now.  There's no good case for how gases are held in.  If there were, that would constitute a natural gravity balloon.  While I think it's a fairly stable construction, that's after careful consideration and engineering to implement barriers that block gas movement.

This equation for central pressure is:

to convert this into structural requirements, we need to introduce the material strength, sigma.  In a simplistic sense this can just be equal to pressure.  I have a mental image of a bar spanning the entire diameter, made of the same material as the rest of the asteroid.  Physically, this is fairly nonsensical butit gets the job done for a simple approximation.

For the specific case of Mathilde's size and density, this requirement is 126 m2 / s2.  Compare to a specific strength for concrete of over 4,000 m2 / s2.  If anything, this probably indicates that the conglomeration of material inside the asteroid is, in fact, not strong.  Alternatively, it shows that a series of breaking and rearrangement has already taken place.

Consider the alternative of a building on Earth.  It also has some average bulk density that results in a pressure at the bottom.  Atmospheric pressure is disregarded because it's irrelevant to material failure.

For direct comparision we would like to put this in terms of material specific strength.  We have to decouple the "load" and "supports" to be practical, but I'm not too interested in that right now.  For 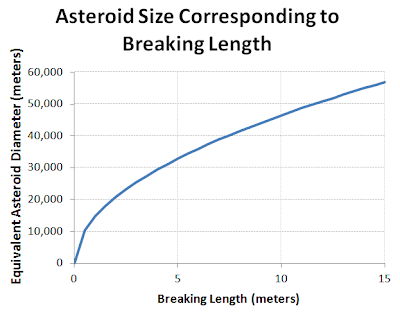 For reference, Mathilde has a diameter of 53 km.  So resisting collapse of the voids at this size would be roughly equal to the task of resisting breaking over a length of 12 meters of the surface of Earth.  Obviously this is because gravity is weak, and the Earth is big.  Still, it's an interesting observation that's really hard to wrap one's head around.

In this blog, and elsewhere, it's generally taken for granted that making it to the center of a large asteroid would be difficult task.  For many, yes, this is the case since the macro-porosity is effectively zero.  For the majority, however, it's either fairly major (>5%) or we just don't know yet.

It's incredible to think that drilling to the center of such an asteroid... might not require any drilling.  You might be able to just float on in a giant cave entrance.  Exactly how much will be accessible and how easily is an unanswered question.

Even candidates like Eros have a major macro-porosity value, somewhere in the neighborhood of 10%.  This is a small amount of the total, but in terms of access, it could make an unbelievable difference.  If future methods could give a good idea of the 3D distribution of matter in an asteroid, and then the composition as well, then development of their resources will be a very different matter.

There are also major changes to the pressure-volume relationships.  I've never even considered the idea of increasing the density of the rock, but this would be possible for highly porous candidates.  It would be obvious to use the existing voids to store resources or excavated rock.  Doing so doesn't quite reduce the pressure due to self-gravitation.  On the other hand, moving around large rocks while at the same time avoiding cave-ins and other material rearrangement would not be an easy task.  Still, it's something that can be analyzed and worked around.
No comments: