Material strength is the enemy in the design philosophy of the gravity balloon, as I have laid it out. Honestly, I think that it is always the enemy. It is one more thing that can go wrong operationally, it's not something one would like to rely on for safety. It also lacks a sort of elegance needed for the massive scales and volume of industrial replicability that is needed for massive zero-gravity industry of the future.

Looking at both the approaches for the the task of tapering - bringing the friction buffer sheets into a smaller radius without defeating their economic point - I feel like I'm still missing something. Neither of the designs I wrote about does a good job of eliminating the need for tensile strength due to the different radial acceleration of the air between sheets. On that point, I think I might have already conceded defeat. In gross terms, the extra tensile strength isn't actually a problem. It would pale in comparison to what the rotating tube's hull itself would require, and that would, again, be vastly less than a comparable fully 1-bar pressurized hull. No, I think the problem is requiring both strength and numbers at the same time. The failure modes are not good in that case. There is a level of material quality assurance that must be very robust. Additionally, it has intense tie-ins with the stability questions still outstanding for the many-layer hydrodynamic stability. Oscillation is also a problem if the friction buffers have good mass to them, and the idea of them as something more ephemeral has always been something much more appealing from an engineer's perspective.

I have briefly mentioned a 3rd possibility in addition to the taper-nested and taper-zero options that I have been playing around with. You could basically combine the two. In particular, on the large scale I think that taper-zero is hard to avoid. It keeps the outer motion in the right kind of reference frame, the air ingress patterns give some very needed design flexibility, and it doesn't have those darned problems of undesirable connection points. It's the connection points that I think will sink the other design.

So it's worth while following this rabbit hole for some time. Trash the taper-nested option. Start with taper-zero, and use something apparently exotic - a hierarchical type of design to them. I've used that word before, but I think that "group" might be better, because there would only reasonably be 1 layer to the hierarchy.

The idea is that flow divider sheets are divided into 2 categories. One consists of infrequent "heavy" (although not all that heavy in absolute terms) dividers that hold a pressure boundary across its surface. These do substantial radial tapering toward the ends. The other type consists of a sheet that really has no material strength, and merely rests on air pressure. The connection points for the "flimsy" sheets are almost directly to the side, on the inner surface of their neighborhood "heavy" sheet. For the "flimsy" sheet, this avoids the problems of pressure ride-up in the taper altogether by outsourcing the task to the other type. For the "heavy" sheets, it consolidates the manufacturing and operations complexity by reducing the numbers to around maybe 4, when it might have otherwise required 20. This can also be a go-to solution for centralization of the pressure management of the "flimsy" sheets.

I'm still not sure how contact might be maintained between the heavy sheets and the flimsy sheets. There might still need to be some tapering... but maybe not.

I hope to return to this, and I'm sure I'll make a detailed post sometime after I can get around to sketching some of the basics and doing brief mathematics on it. I just want to throw it out there for now. I'm definitely thinking about it, and it absolutely has tie-ins to the most major problems of the gravity balloon design.

I also find it interesting that this makes vastly more sense as you talk about larger and larger artificial gravity tubes. I've kept assuming a 500 meter diameter, but realize that might be too little. Once you talk about > 1 km, then the non-hybrid approaches start to look more and more unrealistic.
3 comments: 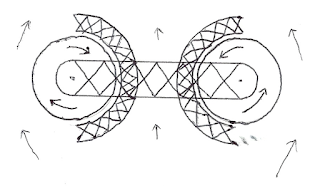 I started thinking about this topic more after seeing some artwork in the Accelerando blog. In future posts I do hope to provide more specific commentary and back-links those works. My intent here was just to put this concept out there.
2 comments: