One apparent complication is that the pressure of a gravity balloon habitat wouldn't be constant as you increase the inner volume by adding more air, or "blowing it up".  That's a reality that would have to be dealt with unless you could add a significant (really significant) amounts of mass to the outer surface.  This is a similar reason to why the the window of usable asteroids is limited in the first place, but it is particularly problematic if you want to start small and get bigger without huge swings in the habitat pressure.  Here, I'm going to talk about some of the basics and how rotation could be used to mitigate this swing.

The mathematics of the problem turn out to be rather easy.  With spherical symmetry, even if you have the inside filled with air, the simplifications from spherical symmetry are still there.  The field is thus linear with radius, no matter what kind of size or air fraction we're talking about.  To exactly find what the internal pressure would be for a gravity balloon, you would integrate the gravitational field times the density - the same relationship that causes pressure under water to increase with depth on Earth.  The relationship in simple terms is:

Actually, it gets more complicated than this because the mass of the asteroid is actually a function of the other variables, the density, inner radius, and outer radius.  Substituting that leads to the cubic that you can see in the result here.

I implemented some functions that solve this numerically.  A fun detail is that the shape of the function is the same if you appropriately scale it to the size you're looking at.  That means I can cite the relationship for all gravity balloons (or at least the ones that don't spin) in a single graph.  To do this, I'm using a relative radius and a relative pressure.  The pressure is relative to the pressure in the center of the asteroid before any volume in the center is carved out, and the radius is relative to the outer radius at this point, and a similar reference is used for the volume. 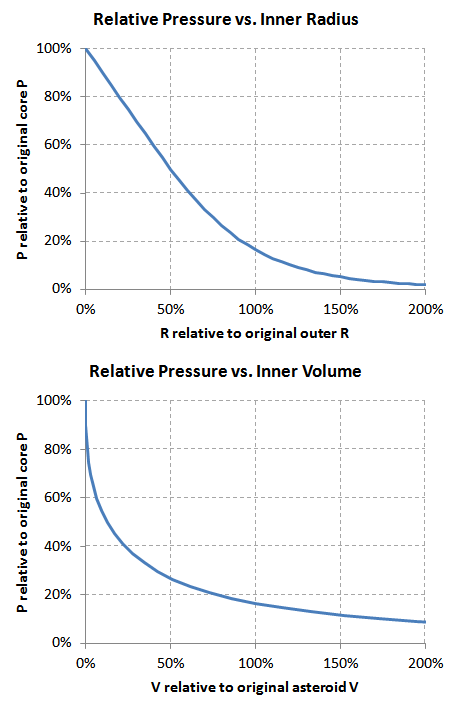 The important thing to note is that the rotational potential has the opposite sign of gravitational.  That means that it decrease the internal pressure because it decreases the overall "force" that the upper layers can exert on the lower layers.  So, how would this affect things?  I tried to answer this using an extremely simple approximation.  The details of more sophisticated corrections are discussed here, while the complications from non-linear effects were asked about here, although no real conclusions were found.  Without considering the deformation of the shape itself, one will wind up underestimating the effects, so that does need to be kept in mind.  The level of pressure for the 3.5 hour rotation period I'm giving here is actually probably closer to a 2 hour rotation period, which I've seen quoted by NASA as generally the practical limit of what any body could rotate at.

It should also be noted that the shape deformation depends only on the density and rotational speed.  It doesn't depend on size.  This can be confirmed to one's self by noting that the divergence of the gravitational field and the rotational pseudo-field are both constants.  The former has density in it and the latter has rotational speed.  These numbers are certainly inaccurate, but the general relationship is definitely real. 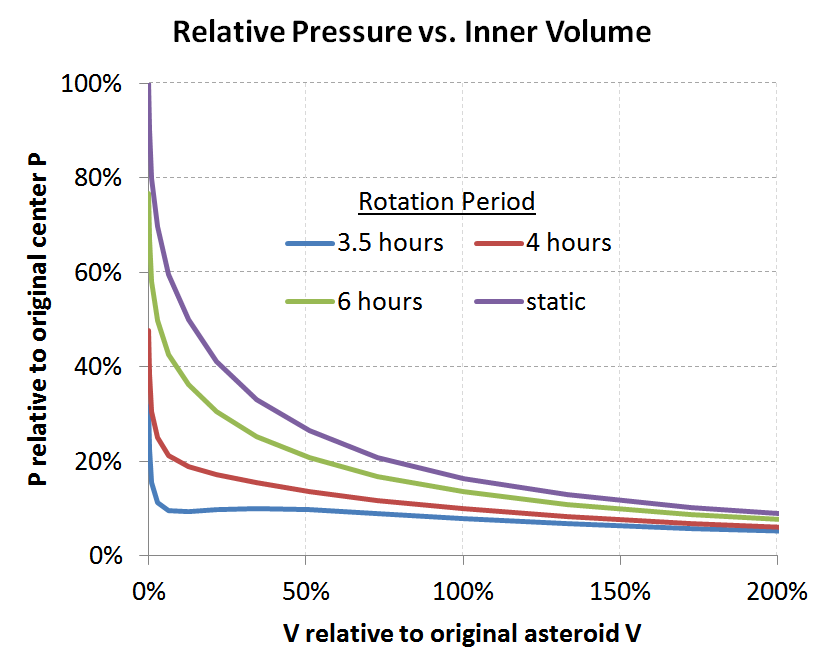 Here, what I've done is to keep the angular momentum of the system constant while increasing the volume of the inner sphere.  That means what you see about is what you'll see if you start it rotating at the stated rate and start inflating the center.  The moment of inertia increases so the rate of rotation decreases, and this is what decreases the slope rate of decrease of pressure?

How would you go about rotating such a large asteroid?  Well, it's likely already rotating.  If you go through the list, you find that even fairly large asteroids tend to cluster below a 10 hour rotation.  This makes sense when you think about the fact that Earth was slowed down over billions of year by tidal forces that these bodies do not see.  So it's possible that some fast-spinning ones would have a fairly flat pressure-volume curve for inflating them without any additional action by us.  But even so, some major fractional drop in pressure looks unavoidable.

Nonetheless, people can actually tolerate a range of pressure, particularly if the gas composition can be intelligently adjusted.  Plus, if a civilization was advanced enough to inflate an asteroid to large internal volumes, they would likely not find it all that difficult to add rotation themselves - giving fine tuning control of pressure.  For modest volumes it wouldn't matter that much in the first place.