Price of Floor Space in a Artificial Gravity Habitat


In this post I will go into math needed to get a value for the structural mass needed to build a rotating structure that creates artificial gravity.  I'll then put the case into terms of dollar cost, and go over what kind of inputs and assumptions you need to get those numbers.  For the question to be answerable, you basically need area, mass, and engineering margins.

To start with you have to formalize your requirement.  With basic physics you can relate the minimum weight and strength of structural material for some load.  I did that on Physics Stack Exchange.  The equation for the case of supporting it by circumferential material comes out to something very simple.  Repackaging this to give the required amount of structural material, you can say the minimum structural material is the following.  Here, R is the radius of the spinning structure, g is the gravity you create, sigma is the material strength, and with rho, density, it becomes specific strength.

I also obtained an equation for using cross-beams.  This was more difficult.  To put in terms of an equation that returns a minimum structural mass:

As far as I'm concerned, both of these will reduce to the following, equation which is an approximation that works for both above equations under the assumption the material strength is much greater than the minimum for a zero-load structure.

Speaking of the zero-load structure, that is the case of a rotating thing that doesn't have to support anything.  You can get that from the above equation by setting the two masses equal and then you find a single value for material specific strength given the radius and gravity.  If you consider an artificial gravity habitat with a diameter of 500 meters, the material specific strength lower bound is 2,450 N-m/kg.  That number needs some context.  The strength I'm quoting of 2,450 N-m/kg is the absolute minimum strength, meaning that if you spun a hula-hoop of this size at this rate in zero gravity, then it would break apart if any part of it had strength less than that.  There are two multipliers you need to work against, which is the fraction of the mass that is load, and the engineering margin.  Practically, if these are both on the order of 10, then you will ideally want some material with a strength 100 times what that number is.  To give a reference, here are some specific strength values of material.

From this, we see that a 500 meter diameter tube isn't unreasonable from a materials standpoint.  Any reasonable assumptions for margin could probably be satisfied with fairly ordinary materials.  I'm particularly interested in Carbon steels, because the materials needed to make it is extremely abundant throughout the solar system.  A36 steel has a specific strength of 36,764 N-m/kg, which could be problematic under certain assumptions.

We can't know that much about the constraints of space manufacturing of structural materials in the future, but like other concepts I write about, it's reasonable to think that general engineering trends won't be unbroken.  In particular, the relationship between the cost to produce a material and its strength is a reasonably strong one.  Here is a graph showing the range of marketed materials on Earth today.  I notated some points on it so that I can employ it mathematically. 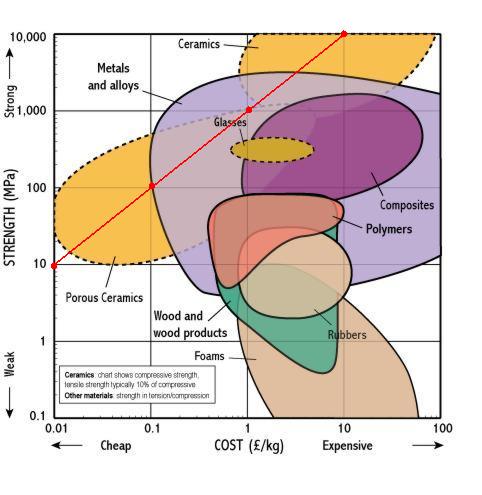 
Obviously there is a great deal of variation, but it still stands to reason that the general relationship may hold long into the future, and possibly indefinitely into the future.  We can use that line above to write an equation for the relationship.  It is a log chart with both axes, so the equation needs to reflect that.  The points go as follows:
These points have a direct proportionality, so the line can be summed up in a simple conversion constant.  That constant is 100 MPa for each pound/kg, or 100 (MPa-kg/£).  This is saying that the strength is equal to the specific cost times that constant.  The price is equal to the specific cost times the weight, by definition.  Combine these two, and use the density to convert the strength to specific strength, which leaves an extra density term.  That density combines with the cost coefficient to get a new type of coefficient which is the density dividedby the other figure.  Then, the previous expression for structural mass given a material and load value can be plugged into the price equation.  The specific strength cancels out (very interestingly), and we find that the cost only depends on the load and that new coefficient.

This is a very interesting result, because it demonstrates that as long as the material is sufficiently strong, the price doesn't really depend on its strength.  Given this is true, you would generally opt for a material higher up on the above line.  You would prefer carbon fiber over aluminium just because it's easier to work with.

Let's get some values for this now.  I'm going to plug in a generic density to be representivie of steels, use the above coefficient for price, and also the current conversion rate between the Great Britan Pound and US Dollars.  With this, we can put the price in terms of the radius of the structure and load that needs to be held up.

The units are helpful, as they clearly reflect what's going into the equation.  The price for the same amount of load is greater for larger artifical gravity environments, this is pretty hard to argue with.  Also, this equation can be exersized on the basis of mass itself, or with mass-thickness.  The only difference for the latter is that different units will be given out.  If you use it with a kg/m2 metric, then the ultimate price you will get out of it is dollars / m2.

Mass thickness is the amount of matter per unit area.  It's relevant for attenuation problems as a combination of distance and density.  It's also the metric that directly matters for the structural needs of a rotating artifical gravity habitat.  In order to competently talk about such a habitat we need some expectations of how much matter per unit density we'll want inside it.  One approach I have is to look at buildings.  A good way to get a sense of the mass per unit area for an office environment is to take the mass of a large building and divide it by the floor space.  I'm going to do that here for the (former) Sears tower.

It's also important to mention the water-depth equivelant.  The figure of 500 kg/m2 corresponds to a mass thickness that is equivelant to water 50 cm high.  If you think about it, that's pretty high.  That's a lot of stuff.  If you imagine a typical house, and pretend that everything turned into water and puddled, then how deep would one expect that to be?  The reason this is an important question is because these artifical gravity habitats in the gravity balloon would have a material cost directly proportional to the mass in them, which for planning a terresterial-esque habitat, is basically a matter of the mass thickness.  So with the office space example as a baseline, I want to compare what different size tubes would cost in terms of materials given different mass thickness values.  I'll start off with the 500 m diameter tube due to the reasons of Corolis forces, and then go up from there.


This shows that if you have a normal office density in the smallest possible tube, you're looking at something like $40 per square meter.  How does that compare to the alternatives on Earth?

The farm comparision is at least a little bit unfair.  No one would think that you could farm with conventional methods in a gravity balloon, that just wouldn't make much sense.  So the building price is the best comparision point.  Still, I haven't worked in margin to the equation.  Let's say that, generously, you only need a factor of 3 lower than the yield strength.  That means that our low case is now $120 / m2.  The probelm is, this isn't even all the costs.  It's only the cost to get the ground itself rolled out there.  You will still want a ceiling over your head, possible multiple floors, pluming, waste treatment, all other forms of infrastructure, sidewalks, real homes, I could go on.  The price for floor space in our reference case of the US today includes all of these things in addition to the price of land itself.  I should also mention, this is only for the gravity balloon.  If you want to talk about a contained, rigid, artifical gravity habitat, the price per square meter would be 20 times that, $2,400 / m2, and this is frankly the best case scenario.  Living in space isn't cheap.  But then again, this is a reason the gravity balloon is a reasonable idea.  You avoid all the cost of making materials to contain the atmosphere.  That's managed by the larger engineering project of hollowing out space, controlling pressure, and worrying about the global dynamics.

Of course, all of this is based on the absurd assumption that materials would cost the same to make in space that they do on Earth, and that's clearly not true at all.  The zero gravity environment may be better for industrial production, and many people think that space could lead to the age of abundance.  The only point I want to make here is that there's a fairly strong upward sloping curve that you have to work against with those technology advancements.  Plus, I've not seen any numbers like this anywhere else.  If we want to take space settlement seriously, we need numbers.