Or: why the ideal candidate depends on what you're after

Conceptually, this blog is mostly focused on the idea of "moving into" an asteroid by drilling a hole into the center, sealing the area off, and slowly replacing the rock with air.  Denser, more metalic, rock will have a higher central pressure for the same mass.  This effect is actually quite dramatic.  Let's consider the wall thickness needed to have a marginally small balloon of air in the center. 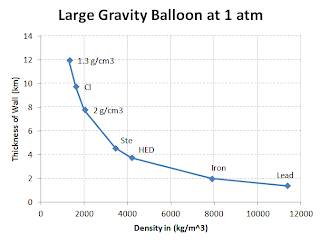 I used several density benchmarks from a useful paper for the points in that graph, which just represent different cases.  From this, you would obviously conclude that a more dense asteroid would be more easier to work with, at least at first.  This is somewhat the case with Eros.  Its material has a specific gravity of 2.67 on average, so it can hold normal atmosphere even though it is much smaller than Phobos, which struggles to do so itself.

The more complicated twist is a concept I call "Inflatability", which seems approproate given the balloon references.  Basically, as you enlarge the center cavity, the pressure due to the force on gravity on the rock walls decreases, and the air pressure experienced in the habitat (in the absence of other structural factors) droops.  This will obviously put the pressure below the habitable limit at some point, and this point will be different for different bodies.  However, the math works out in an interesting way.  Basically, the geometry can be reduced to a "dimensionless parameter", which represents a relative degree of inflation.  So start with a marginal central volume, and then increase this to a final state that looks more like a balloon.  We can show that the percentage drop in pressure follows from the fraction of the asteroids initial radius the volume is expanded to.  This is actually fairly easy to picture with a graph that I've sense updated since I revisited the governing equations last post. 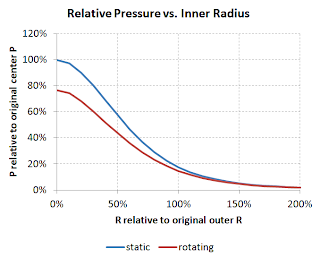 Side note: This graph was corrected from the previous version.  This one correctly reflects the slight stall at low radii, due to the nature of the hole's effect.  Keep in mind that volume goes as R^3, so the function's curvature is uniformly positive when in terms of volume.  I still included the case for an initially rotating asteroid but this would be extremely uncommon in practice - it's rare to see a center pressure correction of more than 1% due to rotation.


If you think about it, this raises an interesting dilema.  Since the pressure droops according to the *fraction* of the initial radius, lower density bodies have a lower droop, but longer access tunnel.  Consider that this is a tradeoff of considerations that would matter more to a civilization depending on the stage of development they're on.  Their challenge might be:
A selection that skimps on the first point will go on to have trouble with the second point.  If your goal is a massive mixed gravity world, then you can't take the "easy route" of a dense asteroid, which may only need an access tunnel of 5 km.  You'll have to start with a less dense asteroid that likely has a starting radius of 20 km or more.  As a rule of thumb, the pressure starts to very significantly drop when your habitat radius approaches the original asteroid radius.

The droop that can be tolerated isn't very clear to establish.  Skylab was a space station with a cabin pressure of around 0.34 atmospheres, so this is obviously workable, but it's not clear if its desirable long term.  The NSS suggests 0.5 atmospheres for a permanent space station.  On the other end, I've looked into compressed air Oxygen toxicity limits, which tend to be a problem around 3 atmospheres.  In fact, people have spent days on-end in this kind of pressure.  However, Earth has a pretty constant pressure for the most part, and the upper limit is based on assumptions that don't have to be true.  So we conclude that both ends of this limit can be pushed one way or the other, but for now, we might as well look to a factor of 8x or so just to establish the maximum pressure fluctuation that we'll tollerate.  This isn't absolute, but by the nature of biological properties of humans, the error bars are large.  For a given pressure ratio, we look to querry how large of a habitat we can make.  I tried to illustrate this with the following graph.


Pressure droop ratio that follows from a given
Radius of Inflation

This tells a very interesting story.  The merit of a gravity balloon is large volume with no structural materials.  This puts the maximum size you can produce into a helpful context.  These only radii figures, so it follows that (for instance) a livable diameter of 80 km can be produced by using an asteroid with a specific gravity of 1.3 and tollerating a pressure drop of a factor of 8.  Now, an 80 km sphere is pretty large, but I certainly think it's a desirable *concept*, although obviously long-term.  Even if you can't go beyond a diameter of 2 or 4 km, creating such a habitat would be a mindblowing advancement of humans into space.  For every case, however, producing the air itself will remain a challenge since it scales directly proportionally with volume.