On the International Space Station (ISS), people are packed in like sardines.  For manned stations such as this, the constraint is generally taken to be that some bare minimum amount of volume per astronaut is need.  I'm not exactly sure what biological justification they use for this, but I'm pretty sure that not going insane is a big part of it.  My calculations put that volume in the ballpark of 100 cubic meters per astronaut.  That figure is complicated by the fact that it is not currently occupied by the intended number of astronauts.  There's also a lot of equipment.

For a distribution of artificial gravity rotating tubes in a zero-gravity atmosphere, I've made a reference design which also has a particular packing factor of people per unit volume.

In both of these cases, we're assuming some density constraint given to us from some other type of engineering (aside from the station design itself).  In the case of the ISS, human-factors engineering dictates a volumetric population density, and in the case of my reference tube design, various energetic constraints prevent sizes much larger (which I hope to write more about later).  Neither of these are very absolute, and compromises by the inhabitants would allow you to use a higher density.

At a certain size, however, there is a thermal limit based soley on how fast the station can radiate away its heat.  Assume a spherical habitat (I understand this is a bit of a physics meme, but in this blog it's literally the case).  With that, we very easily establish the maximum population that can be housed with a given sphere radius and a given radiator temperature.  This assumes the radiator covers the entire spherical surface and there is perfect heat transfer from the habitat's core to that surface. 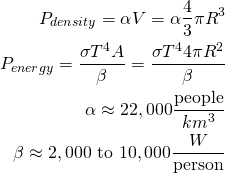 It's obvious from the form of the equations that this concern is relevant for large sizes, but not for small ones.  The ISS still has a thermal management system, but it only needs a small radiator compared to the size of the entire station.  The density-based maximum population grows with R3 (radius cubed) and the heat radiation constraint grows with R2.  That means there will be a cross-over point.

For the given parameters, these population constraints are plotted below.  I entertained two cases, one where people use 2 kW on average (which is consistent with the modern developed world electricity use), and one where they use 10 kW.  The electricity use alone doesn't account for all energy use, and then there is the issue that farming is very energy-intensive and may need to be conducted within that habitat. 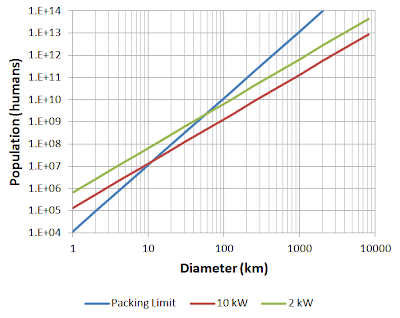 The cross-over point is fairly obvious here.  To give real numbers, here is a table.


Radius of Crossover from
Density-Limited to Energy-Limited
and Maximum Population at that Radius
Assuming Maximum Packing Density of 22,000 people/km3


Small asteroids-turned-habitat would not be limited by the heat removal, since they couldn't get much larger than a 10 km inner diameter.  But then again, a very large habitat size is quite desirable.

For someone designing a habitat of a size much greater than these crossover points, they'll have some decisions to make.  Imagine they're given population as a prior constraint.  They might simply choose to have a lower population density in order to avoid having to deal with the heat rejection issue.  On the other hand, to make use of air and asteroids as efficiently as possible, perhaps they'll implement some more exotic system.

The constraint that the radiator lies on the surface can be broken, and it wouldn't be particularly difficult.  A neat approach would be to use geosynchronous orbit to increase the effective radiating area.  This is logical because most asteroids rotate with relatively fast day-lengths, meaning that it wouldn't be difficult to build the needed "space elevator" from the surface to GEO, and also run large pipes over that distance.  Nonetheless, the material constraints would be much more significant in this case.  If you're only working between the inner edge of the habitat and the outer surface, there are lots of ways you can use the asteroid rock to help make building the coolant channels easier.  If you're "over-sizing" the entire thing with the ring radiator concept, then you're going to be tacking on a lot more material constraints.

So I sketched a brief image of what I'm talking about.

Yet another problem is whether the ring approach would buy you any increased area in the first place.  For the concept to make sense, GEO would have to be much further than the radius of the gravity balloon.  With short rotation periods, this isn't quite the case.  Small asteroids rotate at a variety of rates, with some of them spinning so fast that GEO is below the surface.  Those are too small for the purposes of a gravity balloon in the first place.  In fact, most objects would have a much greater area covered in the GEO circle than by the outer surface area.  Additionally, this ratio will grow when the gravity balloon is inflated.  That process increases the moment of inertia, so the rotation rate slows and the GEO point moves outward faster than the surface itself.  If it is too far out, however, material limits will become a problem, as well as debris and other things.  Generally, the ring radiator would be a much more challenging concept to build.  But that makes sense, considering that it would never be built unless the size of the colony was gigantic to begin with.

I like to think of Virga as a world that is limited by heat removal.  The author even makes some references to ice formation on the inner side of its shell.  Heat removal limitations are actually a convenient explanation for the density of people in the sphere.  In the story, rotating cities are separated by great distances.  We can say this is because the atmosphere would get too hot if the density was much higher.  It's a neat idea.  It paints a picture of relatively empty and expansive gravity balloons when their diameter exceeds 10 km.  However, make no mistake that this is a constraint, not exactly a good detail.