The complete scheme for heat transport within a gravity balloon habitat with artificial gravity cylinders can be segmented by following general outline. This tells the story of the path of heat as it's generated where people live through the point when it eventually gets emitted out into space.
This post will focus on how the air currents transfer the heat from the outlet of a tube to the wall of the gravity balloon where the heat exchanger then picks up, #3 in the above list. The previous post outlined one valid scheme for #2. In the past I've entertained several bad ideas for a scheme that accomplishes #3. Notably, since the currents need to occur over such a large area and only need to move so slowly, I imagined an impossibly large fan many kilometers across. If possible, apparently absurd or extraordinary schemes should be rejected (unless the problem it solves is, itself, extraordinary). In this case, just like in the last part, a much more elegant solution presents itself.

Just like heat transport out of the artificial gravity tube, it would be preferable to reduce the number of parts, so if there's a device already called for by the design we would prefer to configure things so that one device solves multiple problems at the same time. Thankfully, that exact thing is possible. We will pump the air ultimately by using the driving force applied to keep the artificial gravity tubes spinning.

But first, I must specify that I imagine a stationary lattice which is connected to the asteroid rock and can accept forces. This is absolutely necessary for the motors to push against which keep the cylinders spinning, but they shouldn't be particularly difficult to build. A key distinction now comes in how we configure the outermost layer of the friction reducing flow dividers (friction buffers). That outermost layer could conceivably be connected to the stationary lattice structure. Up until this point my math has assumed this is the case, but that was only done for mathematical simplicity.

In fact, it would be best to allow the outermost layer to freely rotate. For some numbers, let's say that the speed of the habitat on the inner surface of the tubes is 100 miles per hour and there are 20 flow dividers. Each stage then sees roughly 5 mph relative speed to the next stage. What will be the velocity of the outermost layer? Answer: considerably more than 5 mph.

Given that the outermost sheet sees less resistance to its motion, its natural preference will be to couple more strongly to the speed of the habitat (100 mph) than to the bulk atmosphere (0 mph) than would be predicted by it's share of the speed divided evenly among the flow dividers (5 mph). But we have yet another pesky effect that we have to deal with. If multiple tubes are in the same general vicinity and their air currents compliment each other, this could increase the ultimate speed that the outermost layer equilibrates to. Those are potentially two factors which push it above the 5 mph prediction for this case.

For all of these reasons, I believe that the outermost layer will have some kind of "brakes" on it which prevents it from speeding up too much. Even better- if the motor is attached to the outermost layer this will improve efficiency somewhat, although it would require an additional motor to keep that layer rotating slightly relative to the stationary lattice. Even if you simply threw away the extra energy, the scheme will see a very small efficiency reduction and will work just fine. Accept a little extra energy consumption or a little extra complexity - the choice is yours.

All of this is only to say that the velocity of the outer layer can be selected to some degree.

The ability to move flow in the local vicinity between tube would be pointless anyway if there wasn't some coherent path that takes the tube's hot air exahust to the wall's heat exchanger in order to ultimately dissipate the heat. Because of that, I'm making the obvious claim that every tube has its flow connected to two different channels. It obtains its intake air from one channel and exhausts hotter air into the other channel.

Picturing this takes a little bit of creativity, and my illustration skills might be lacking. The divider between the global channels (different from the friction buffers themselves) is a 2D sheet that cuts accross multiple artificial gravity tubes. For the most part, this plane cuts through the tube's axis of rotation. We just apply a slight skew or deviation in order to allow the exhaust and intake ends to connect to their respective channels. Here is my illustration of the situation: 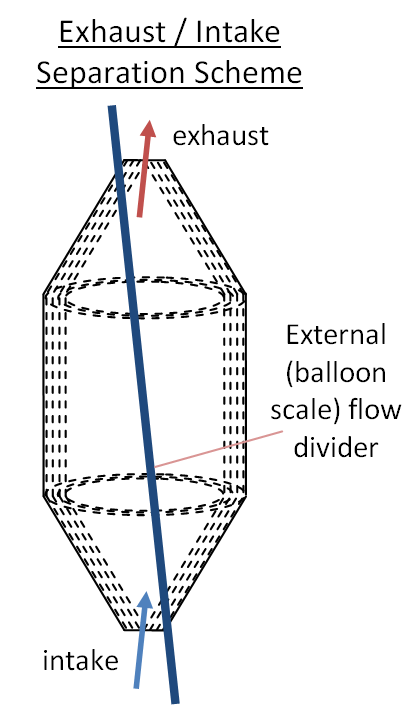 Some attributes are exaggerated in this figure. The exhaust and intake windows are only 10% of the habitat's radius in most reference designs I've used. Thus, this slant we're working with might only be slight. Alternatively, the sheet could be completely parallel to the axis of rotation, and the windows will connect into small local depressions. Well "small" in this case would still be around 25 meters, but that's small compared to other stuff involved.

Moving on, we need to figure out what limitations this scheme places on the overal gravity balloon size and/or population. I will return to my reference design in order to illustrate a pattern of air flow. Flow dividers must be added between a series of artifical gravity tubes, and then air flows in different directions on both sides. This produces an interlocking pattern of air currents. 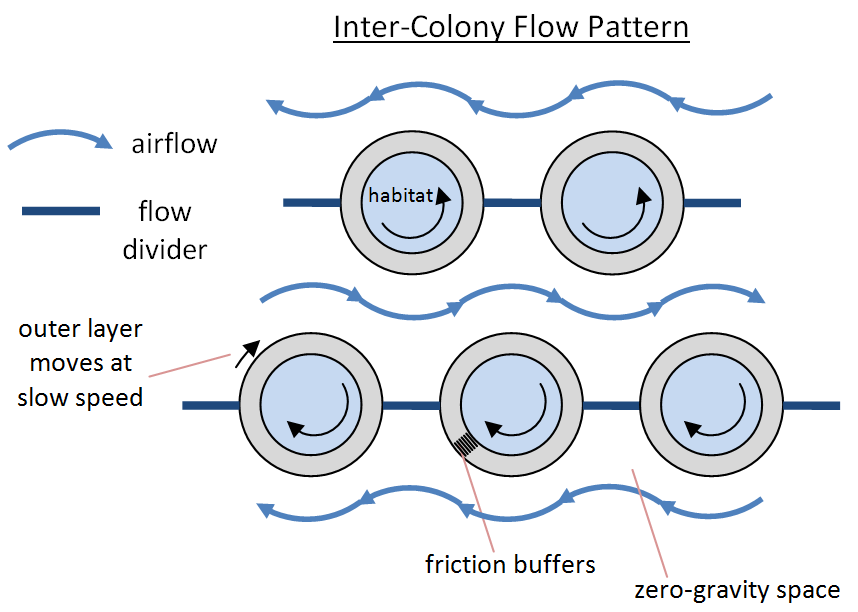 Putting that in perspective of the entire balloon, I have the following image in mind. Here, I have included the presumed heat exchangers on the wall. I hope that makes it clear what kind of back-and-fourth pattern the flow is traveling in, and how it gets hottest right before it gets to the heat exchanger. 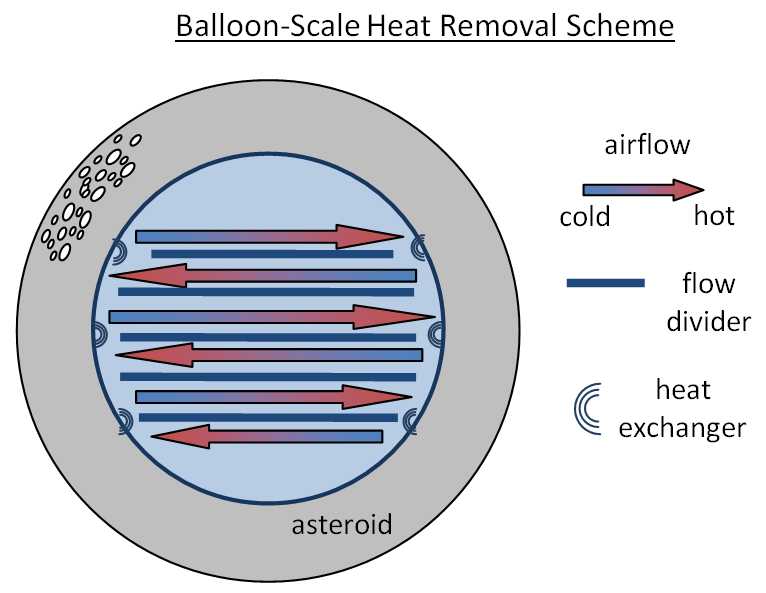 We can set the temperatures to whatever is desired at the start and endpoint for these flows. However, since the flow travels in a straight line, it seems fairly clear that the highest temperature change will be experienced by the line of colonies that goes straight through the center of the sphere. It is this row that sets our limit.

I would imagine this limit will be around 10 degrees C or Kelvin. Perhaps 20 degrees. If you refer to the heat transport within the tubes, that is certain to be on the order of 5 degrees, and some colony will experience the extremes of these temperatures. As such, it's probably best to keep it to 10.

As long as we're accepting my reference design, that has 22,000 people, and I'll stick to the claim that they're using 2 W each, for a total of 44 MW. On average, there is one colony per 1 km^3 lattice. The colony takes up a small fraction of the total volume (about 27%). Thus, the effective flow area is about 0.86 km^2. With all these ingredients, we can formulate the heat balance relationship for the balloon-level flows.

Selecting the Delta_T value is related to biological and comfort limits. Heat transport within the tubes themselves is already known to require about 5 Kelvin of temperature change in order to employ natural circulation at the desired population density levels. If we add much more variation, then we could have undesirable large temperature swings. I would imagine that a number under 5 Kelvin would be acceptable.

As I previously argued, v is a tunable variable up to a certain limit, and that limit relates to the degree of friction reduction in maintaining spin. Presumably, this would be under about 3 m/s, but it could be a good deal more. With this piece of info, we have a fairly strong argument for what the bounds on these variables are.

For a given Qdot, we can find the number of colonies which can be served. Referring to the previous illustrations of the scheme, there is on average one colony per linear kilometer of flow chanel. That means that Qdot/(44 MW) will yield the maximum number of colonies it can serve. Since the hot channel's length is equal to the diameter of the gravity balloon, dividing by 2 can give us the radius of the maximum size (in km of radius) that the scheme can thermally support. I present those cases in this table:

These are large sizes, and the assumptions about Delta_T and v are quite conservative.

This problem, in particular, would seem to be extremely easy to solve and pose little constraints on engineering of other related systems. There are multiple parameters that you could scale up in order to efficiently globally circulate air in a gravity balloon for just about any practical scale.

A large area for the flow channel was key in making this so easily solvable. Even if the generous parameters for maximum balloon size were not sufficient for someone's desires, there are multiple ways of pushing the envelope further. For instance, increasing the spacing between artificial gravity tubes or reducing the number of friction buffers. Even these methods would only need to be applied in a select regions which are subject to the extremes of the hot channel temperatures.

Another major benefit of this system is that the driving force is applied constantly. It is somewhat concerning that the flow path isn't completely straight, but I doubt that any really good solutions to this problem exist. You could conceive of extreme solutions, like flow divider sheets that are partially friction buffers for the tubes and partially friction buffers for the global flow channels, but this is certainly not necessary. The most important benefit of the continuous driving force as well as frictional losses is that no major pressure differential exists within the whole of the gravity balloon. This means that no hardened airtight doors will be necessary for people and goods passing between the different flow channels, which is sure to happen often.