The concept of Rayleigh scattering is really neat.  I discussed the relevant attenuation coefficients for a large space habitat in a previous post.  It still stands to reason that the atmosphere would JUST reduce the light getting to places inside, but it would change the look and feel of it as well.  In a simplistic sense, the shorter wavelength light is reflected (thus a blue sky) and the longer wavelength passes through (thus, a red sunset).  This is illustrated beautifully by Wikipedia, and the basic mechanism goes as follows:

It's a wild idea to consider how this kind of effect would manifest itself in an extremely large space habitat with lots of atmosphere like a gravity balloon.  Getting light in, in the first place, would be difficult, but once you accomplish that, there's also the need to distribute it.  I imagine that this would be accomplished with something like a tree of mirrors.

The seperation of short and long wavelength light would apply to every section of light delivery.  The mass-thickness that we may be dealing with are actually much larger than what you see on Earth during the daytime, since that only loses something like 4% of the visible light.  What we would be looking at is something much more akin to the behavior of Earth's sky near sunset, where brilliant colors are scattered all throughout the atmosphere due to an extremely long path length.  These are only present when the bulk of the light is hitting the atmosphere at a very shallow angle on Earth.  In a gravity balloon, everywhere it went, it would have a large distance of atmosphere to travel through.  Because of that, I imagine (quite inexactly) separation of light in the following ways: 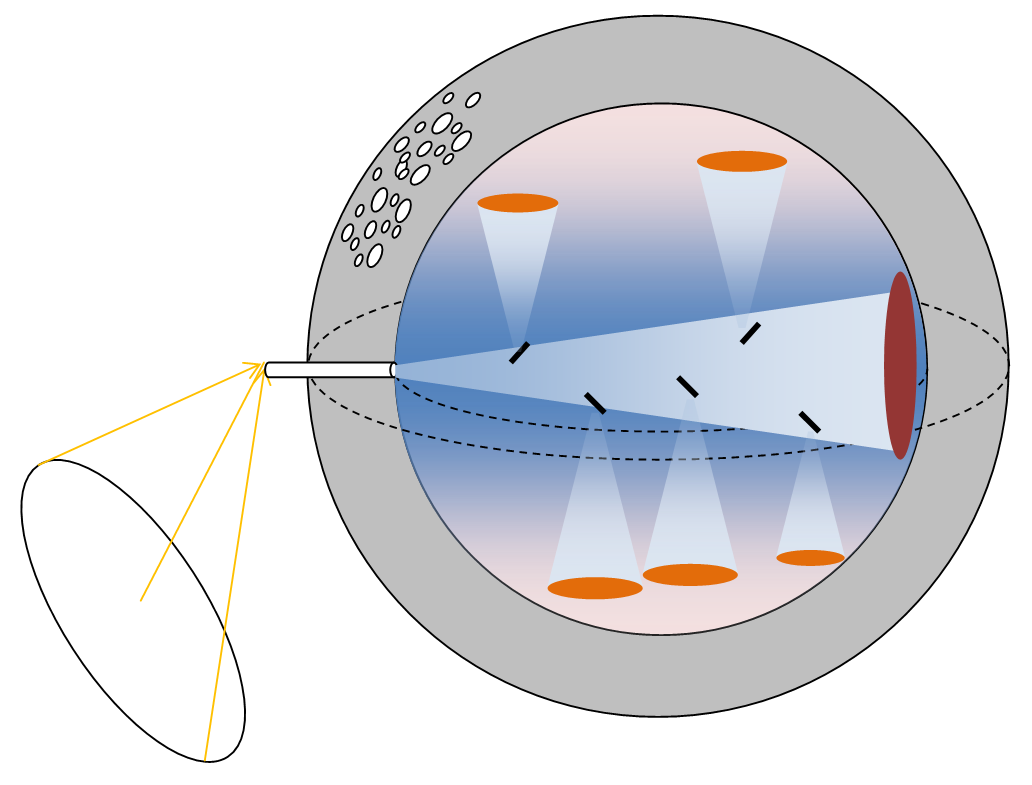 The basic dichotomy is the difference between light that makes it through and the light that gets scattered.  The scattered light is what you see represent the beam's path itself.  The combination of the two would still produce fairly white light on things that it shines on.  However, if the mirrors don't directly reflect the direct light from the sun to walls, then those walls should appear reddish or orangeish depending how far the light beams have traveled.

How this light would be practically used is a more difficult problem.  Artificial gravity tubes at self-blocking.  No one wants to get their lighting to come up through the floor.  I'm not even quite sure how that would work.  The friction buffers complicate the issue even further.  The edges can't be open to atmosphere because of the speeds they're traveling at and the power dissipation that would happen because of that.  That leaves only two fairly difficult options to get the light to the people:

I don't have good answers for these issues.  Obviously one solution is to just not use sunlight in the first place and use entirely artificial lighting.  It is somewhat depressing that the best illuminated ares would probably be the zero gravity regions.  It's hard to see a way around that.  For either approach, going through the tube ends or the tube sides, some amount of additional light collection would be a necessity.  Also, if the tubes are spinning at 2 rotations per minute, that could be difficult to deal with psychologically.  Still, if you imagine that the windows are circumferential, and that light is reflected into it from all sides, then it could be maintained relatively constant, and the same argument applies for the ends.  Nonetheless, each of these proposals winds up demanding reflecting the sunlight at minimum three times.  One alternative would be to simply locate the artificial gravity tubes in the direct line of sunlight propagation to begin with.  That may be more reasonable than it sounds if there are multiple access tunnels that have sunlight concentrated on them from space.  In fact, this is probably the best approach - the eliminate the internal mirrors in the above illustration.  The approaches for distributing the sunlight around the rotating tubes themselves is something I have not done, although it could be neat, I'm a little short on clarity on the exact design issues that would be at play.