Inflation Process of a Gravity Balloon

Let's talk about the process of turning an asteroid of a decent-size (about 60 km diameter) into a gravity balloon.  Doing so means that you have to deal with something I call the "pressure droop".  In one example, we start at a pressure of 3 Earth atmospheres (atm) and infate to the benchmark suggested by the National Space Society of 1/2 atm.

Pressure droop of a gravity balloon presents several difficulties, but it's a necessity that must be dealt with if the goal is to work with a single object and avoid moving large masses around our solar system in the construction process.  The constraint of constant habitability through construction (hereafter I'll call it "inflation") also confounds things a little bit.  Humans can survive in up to 3 atmospheres of compressed air without succumbing to Oxygen toxicity, but it would not be desirable.  It would be much more preferable to maintain relatively constant Oxygen partial pressure and fill the rest with an inert gas.

In space, the most available inert gases might be Argon or others, but for simplicity of analysis I'm sticking to Nitrogen gas.  In the most simple sense, air is a combination of Oxygen and Nitrogen gas.  Because the overall pressure of the gravity balloon is set by the pressure-volume relationship (which comes from gravity), we now have two constraints that dictate the quantity of gases that must be in the balloon at all times:
While this seems relatively simple, there are some tricks.  The above two requirements mean that to maintain constant habitability, you must insert new Oxygen and Nitrogen gas at constantly varying rates.  You can inflate at any total rate you like, but the ratios between the two are set by this requirement.  I've formulated the exact forms for the gas masses using the stipulated requirements, but I should note that they require use of functions that I've written about elsewhere on this blog.  There are some other qualifiers as well.  For instance, since the temperature is set by habitability constraints it is constant, so the density is proportional to pressure.  I use Earth sea-level as a benchmark to reference this to.  Given that, these are the equations needed.  The pressure is actually the function P_RM, and the volume is implemented as 4/3 pi r^3, which puts everything in terms of radius.

Here the expressions are plotted for a particular set of parameters. 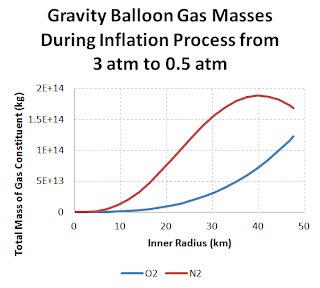 other parameters of this situation include:
Pressure at start of process is 3 atm
Density of asteroid rock is 1 g/cm^3

The rationale behind the Oxygen mass is somewhat self-obvious, but the Nitrogen gets interesting.  It's not unexpected that it drops beyond a certain point.  After all, if you were going to inflate the structure to the partial pressure of Oxygen itself, then you would have to eliminate all of the Nitrogen content in the process sooner or later.  In fact, for the situation described above, the pressure gets down to around 0.8 atm before it makes sense to actually remove Nitrogen.  But if you have to remove some of the gas, that is difficult in-and-of itself, but it's also expensive and non-ideal.

A more likely outlook is that the relatively small final droop in Nitrogen mass would be avoided altogether.  This could be done if the Oxygen partial pressure is fungible to some degree, and it is.  Instead of using the above program, you would probably bump up the Oxygen content a little bit before the Nitrogen peak, and then only level it out to the desired final concentrations.  This would be fairly workable for a goal of 0.5 atm.  But of course, as good scientists, we need to work to break the model first.

I struggled a little bit to reduce the problem to a set of unit-less parameters.  The issue being described here is mostly a geometric issue (meaning it can be reduced to dimensionless constants), but with an added pressure scale due to the demands of humans to have a constant pressure of Oxygen.  Well I figured a method out.  Here are some extra terms I need to introduce in order to communicate the dimensionless parameters:

I will be referring to this point of maximum Nitrogen as the Nitrogen Tipping Point because it is, in fact, an undesirable result for someone considering building a gravity balloon.  You would not like to have to "trash" any of the valuable gas you produce.  It follows that the more swing in N2 gas is, the more difficult the entire construction would be.  It's not hard to mentally picture this problem becoming very difficult for extremely large cases.  You need to produce lots of gas to initially "prop" it up, like a car jack for changing a tire.  The cost of doing that prop might be prohibitive, so we need to know in what cases that will happen. 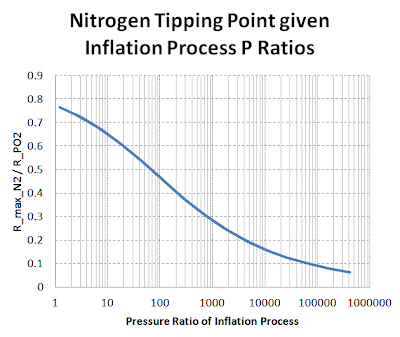 If you had your hopes set on "reasonable" size gravity balloons, then this might be a sigh of relief to you.  There is hardly any practical scenario where a pressure droop of a factor of 10 would be tolerated.  At that point, you would be working with something which was initially uninhabitable.  There are lots of really cool ideas that see pressure ratios for the inflation process span from 1.1 to about 6 or so.  Throughout all of these, the inert gas that needs to be trashed is basically small - to the point that a mild O2 partial pressure adjustment could result in nothing being thrown away.

I should note that for any futurologists with big dreams - large gravity balloons are still viable in a sense.  I took the ratio of the PV product for the Nitrogen Tipping Point relative to the PV product for the fully inflated (only Oxygen) point, and it never surpasses a small fraction of the total.  So if you resolve to "throw away" a "prop" gas in this process, it won't be large in volume compared to the total amount of atmosphere you have to make for the habitat.

But where would all this gas come from?

I don't know.  This is a subject a bit outside of what I know well.  The logical options are:
The latter option is obviously more appealing, but it's not obviously easy.  Mineral chemical forms aren't often easy to work with.  You might have the option of just putting crushed up rock in an autoclave, heating it, and then separating what comes out.  That would be the ideal scenario.  It's also vaguely more plausible with the center material rather than the outside material.  Since you'll be drilling down there anyway that's obviously not a deal breaker.  But there's no guarantee it will be this easy.

Perhaps a better question is to set a defined limit to start out with.  Is there enough O and N to begin with?  In C-type asteroids, the answer is probably "yes", but barely.  We have some good literature on the elemental compositions of meteorites, which are vaguely representative of the asteroid materials.  The result from that is:
It seems that there is no shortage of Oxygen at all.  Nitrogen is the difficult one.  If we imagine an asteroid with an initial 3 atm central pressure, inflated to 0.5 atm, then that has a Nitrogen requirement of about 2e14 kg.  Using the above ratio, we can find that the elemental Nitrogen content of the original asteroid is about 3.5e14 kg.  This means that you would need to extract all the Nitrogen out of over half of the body, and this is just not reasonable.

Even looking at common minerals, like olivine, isn't particularly helpful.  I have not seen a chemical formula with N attached to it which is predicted to be common in C-type asteroids.  However, I think this is because of my own lack of thoroughness rather than anything intrinsic.

A more promising approach is to look to predicted out-gassing of asteroids.  This paper, for instance, addresses the exact thing I'm interested in.  It even mentions N2 gas itself, although in fairly low concentrations.  There are many other compounds with Nitrogen attached to it, and probably some obvious chemical processes that could lead to extraction of it.  But that doesn't guarantee this would be helpful for a gravity balloon.  It may be that the analysis that shows common Nitrogen is only applicable to bodies much larger than needed for an effective gravity balloon.

In short, it's hard to say with my level of knowledge.  Or more briefly, I don't know.  There still seems to be no reason to rule out the gas production as a deal-breaker.  It could certainly be done without the economics blowing up.  I just don't know how.