Why Not Live in the Empty Spaces Inside Asteroids?


Rubble piles are everywhere in our solar system.  The majority of asteroids are likely to be rubble piles.  This means that they are a conglomeration of many smaller fragments which are just resting  against each other, held by their collective gravity.  Within one of those pores inside an asteroid, why not just partition off a defined volume by lining the crevices with a thin sheet that can act as a pressure barrier, and use that as a giant permanent habitat?  This turns out to be a surprisingly good thought.

The object you use for this would have to be well beyond the minimum size for a normal gravity balloon.  That's because if 1 atmosphere of pressure is greater than the force transmitted through the rocks, filling it with air would cause the rocks to unset themselves and lose their structure.  For this idea, let's just leave all of the load-bearing rocks where we find them.  There is certain to be lots of smaller rubble that is not structurally relevant.  Our solar system also gives us an upper bound on the object's mass.  Beyond a certain mass limit, the rubble no longer has sufficient strength and will collapse its pores.  Interestingly, physics then predicts that the surface gravity will then increase, and this may cause a cascading failure that compresses the entire body, beginning the process of differentiation.

To pick an asteroid to build a habitat out of, we're not constrained by mass anymore, since the goal is to use the pores, which are already at vacuum.  I will refer to the "rock pressure" as the pressure that has to be transmitted by the structural rocks.  Between those rocks, you could keep breathable air.  I illustrated the basics of the concepts for Sylvia, which is very nearly the largest body with significant porosity.  By my data, it also has the greatest void volume (which comes from a combination of mass and density parameters).  You would need to place the pressure boundary somewhere below the 1 atm line, but anywhere within that boundary would do.  So here's what I have in mind: 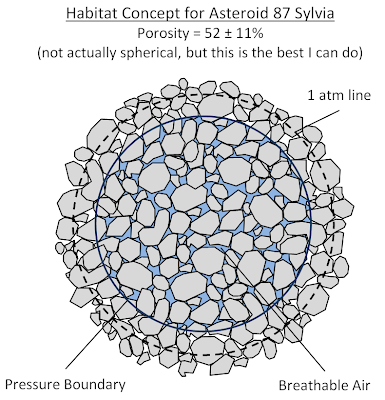 This would create the maximum amount of volume with breathable air (without an "inflating" process).  It is huge, and the total mass of air which can be contained comes out to nearly 18% of Earth's entire atmosphere.  If you sum up values for even a small set of asteroids for which we know the porosity of, it becomes clear the the main belt could easily hold several times as much breathable air as Earth with this method.

This also gets around the problem of "inflatability" that I've referred to several times.  There's nothing to inflate and little matter to move around.  You just erect a thin plastic-ish barrier to keep the air in, and the "supports" for this surface are already there.  Well, almost.  There remains an issue that the crevices will not be trivial to seal.  If you look at packing patterns for spheres in 3D space, the area that needs to be sealed will be on the order of the diameter of the balls themselves.  This is a problem, but one possible solution would be to use the movable rubble as a backstop.  If the rubble comes in a fairly smooth size distribution, then the large rocks will be locked in place due to the pressure from gravity and the smaller ones will be floating around, but those smaller ones will be fitting into the interstitial locations.  If you corral those smaller rocks to the edge of where you want to put the pressure boundary, they can provide a more continuous backstop for the pressure boundary.  I tried to illustrate this below. 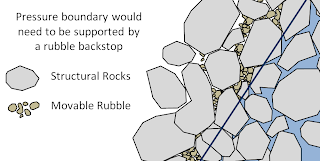 At the smallest end, you might end up needing to mill some rocks into basically gravel, and use that to fill in the final crevices.  Basically, it's a hierarchy problem.  You will need rocks of all sizes to compliment themselves in order to create a relatively flat surface over which to overlay the air boundary.  This concept produces surprising parameters.

There is really no denying that:

Obvious problems with the design:

Obviously, you would not have a totally continuously atmosphere, of the type portrayed in the Virga world.  However, we don't know how large these pores are.  A single pore inside Sylvia might be as large as the largest inflatable gravity balloon.  It is truly a mind-blowing concept.  Of course, you can't get something for nothing, so this is a concept assisted by the material strength of the rubble.  Compressive, not tensile strength.  Gravity pulls "in" and the rocks push "out".  Then, the pressure boundary can physically be constructed with minimal effort by pushing "out" on a layer of rocks which are pulled "in" by gravity.  I return to the concept of breaking length that I've addressed before.  The size of Sylvia corresponds to a material breaking length of about 375 meters.


Equating Breaking Length on Earth to
Side of Porous Spherical Asteroid 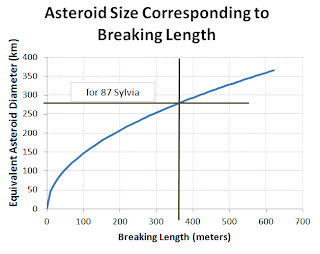 In other words, the rocks are stressed to the same degree that they would be if sitting on the surface of Earth and raising to that height.  This is the type of scale we're looking at. 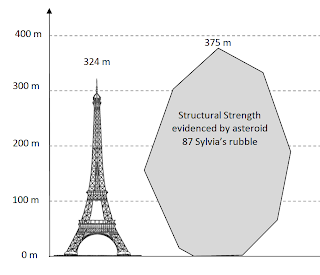 Does that sound implausible?  No, not at all.  That scale is, actually extremely common on Earth.  We see cliffs in Earth's natural geography that rise much higher than this very frequently.  We even sometimes see free-standing rocks that approach the scale that I'm talking about.  Like this:


Example of Large Earth Rock that
Approaches the Relevant Scale 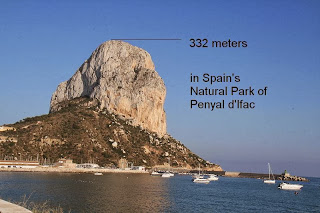 If the asteroid Sylvia is made of about the same type of rock as this thing, then it makes sense that it has not collapsed into itself, and it also makes sense that bodies much larger than it have.  This is also the boulder "size" that the inhabitants would have "hanging over their heads".  Of course, this has no direct bearing on the pore size, because those were formed in zero gravity, which evolves very differently from rocks on Earth.

For more information about this reference case, I compiled this table.


Parameters of a Habitat in 87 Sylvia

Many interesting things lie in this information.  For some values, I've used the reference tube design in my last entry.  That is a tube where about 20,000 people can live and uses fairly conservative assumptions.  It also assumes reasonable packing density.  With the parameters of this potential habitat, we find that it could house a huge number of people by this method.  However, that seems impractical.  There are energetic concerns that come along with this.  It might make sense to reduce people-density up an order of magnitude or so, and leave more empty space.  But that depends on the type of vision you're trying to realize.

Either way, the amount of air that could be held is gigantic.  This object has a semi-major axis of about 3.5 AU, which means that the solar radiation is much less, and insufficient to supply any more than maybe 1 billion people.  But if they had an independent nuclear fuel source, they use energy at a much higher rate.  I included the black-body radiation limit for this object's size at 293 Kelvin, which is room temperature.  The idea is that if you went above this number, you would eventually have to place radiators far above the surface itself.

Then again, why would you need radiators at all?  The object of 87 Sylvia is huge, and it's far below room temperature to start out at.  At that size, internal heat from nuclear decay isn't very significant, so the inside has probably equalized with the average surface temperature, which should be somewhere around 147 Kelvin.  If you were going to increase it from that temperature to room temperature, it would consume 10s of 100s of years of the full power output of such a society.  So in the beginning, there's no need for radiators in the first place.  But this bring up another good issue - might it be too cold?  Well, it would depend on the heat transfer rate, and this will depend on the size of the pores, which again, we don't know.  However, km-scale gravity balloons are almost perfectly insulated.  If the pores are workable large to begin with, then cool-down probably isn't going to be a problem.  I suspect that I could prove this with numbers, but I haven't done it yet.

Now let's talk about the issues with gravity.  In this concept we've forfeited the attractive idea of having a fully zero-gravity habitable area.  This will change many things, and stuff can no longer float around the volume.  The most important consequence is that the artificial gravity tubes will have to be anchored.  It would still take a really really long time for them to fall any significant distance, but it still must be dealt with by mechanical bearings of some type.  Cranes on Earth can have capacities on the order of 400 tonnes or so, so it seems that this problem is of a greater scale than familiar construction activities.  Still, the mechanical bearing wouldn't have to do much, it would be a simple tether, and it would be static.  For the scale of about 14,000 tonnes of force, I imagine that would be workable.

There are also some interesting orbital properties of this object.  It does have two moons, which has already attracted the attention of astronomers, although it has no relevance to the idea I'm pitching here.  If you wanted to use it as a space transport slingshot, you could since geosynchronous orbit isn't very far from its surface.  However, it's location is not ideal.  It is a poster-child of the asteroid belt, at about 3.5 AU.  That would create difficulty in getting to it.  Even extremely quick, snappy, trips would probably take on the order of years to complete.  There are much closer objects to set up simple habitats nearer to Mars orbit, and this is not one of them.  This is the gulf that you have to cross in order to find such a favorable natural structure which can serve as a habitat for countless numbers of humans.

I can think of some other really quirky issues with using this body in this way.  Some of the rubble might be ice.  Who knows?  As you use this to hold air at room-temperature, you might cause changes in the rock.  This would be bad if it caused collapse, but it also might cause unpredicted geysers and things of that sort.  There is sure to be no lack of material, and even a great diversity of material since it may have been created by accumulating many other smaller (diverse) bodies.  There's no telling what kind of scientific unknowns you would be dealing with.

For now, even the most basic geometry of this thing's interior is a secret.  But you could, in theory at least, just walk in, put up drapes, and you would could have a massive pressurized environment.