From the Orion's Arm website, I have been directed toward another similar design.  The original proposal seems to trace back to Dani Eder (possibly in 1995).  I believe this is the same person who wrote the Space Transport and Engineering Methods Wikibook.  In that discussion, people were trying to ask what the largest realistic structure that could be built is.  He correctly concluded that this would be a gravity balloon of Hydrogen, made even larger by rotation.  Wording used there was a "Bubbleworld", which appears to be the concept I call a "gravity balloon".  This Bubbleworld is much more relevant, but I can find very little information on it.  Worse, I had passed over the concept in the past because it shares a name with other proposals that are not relevant to this blog.  I would like to find more writing on this Bubbleworld, but I'm not sure if I will.  The wording used for Ederworlds on Orion's Arm is "Inflated, self-gravitating megastructures," which is very promising to me.  However, it seems that the title of "Ederworld" should be reserved for the goal of creating the maximum possible living space, which is the quirky design that I'll get into here.

I've repeated the calculations for the Ederworld described in the email that it apparently comes from.  It is a serious mind-twister.  The goal is to create the largest possible living area in terms of volume.  Previously, I have entertained the concept of the Virga world, which is the largest world you can create with a simplistic gravity balloon concept.  In order to go further, Ederworld introduces a bubble of Hydrogen gas in the center, which is prevented from mixing with the ordinary air on the outside.  As you increase the size of this central Hydrogen bubble, the thickness of the air shell decreases from Virga's dimensions.  That means that you're accepting a reduced thickness of the living area in favor of an increased radius.  Exactly where the optimal point will fall isn't trivial.

If you assume that the Hydrogen gas isn't compressed any, then it turns out the optimal point is infinity.  This problem is fairly sophisticated, but can be done with simple algebra.  I've done that, and taken the limit for large values of R.  In the final form, you can see that the volume scales with R2 times a constant that comes from the problem parameters. 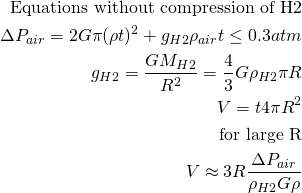 This means that a larger Hydrogen balloon will always give you a larger livable area - and it means that our assumption was wrong.  At sufficient sizes, it's obvious that Hydrogen gas compression will be significant.  In fact, it is this factor which will ultimately dominate.  That also makes the problem very very difficult to solve.  I used the numerical integrator which I described in my post on superlarge gravity balloons.  That is applied for the Hydrogen core.  After that, the "large" assumption is appropriate for the livable area and outer shell.

With that numerical integrator, we can start with some central pressure and then find the radius at which the pressure has dropped to 1 atm.  That's the condition for the interface between the Hydrogen gas and normal atmosphere.  The result of this inquiry is quite fascinating.  Beyond a point, adding mass to a ball of gas actually decreases its size.  Of course, a ball of gas with these central pressures would not be viable naturally.  They would evaporate away.  However, this is still the same basic idea as with our gas giants.  In a simple model, they just lie further to the right on this curve.  However, some phase changes happen, so it's not actually so simple... 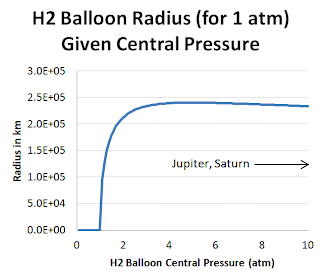 You can see that the radius itself hits a maximum.  So obviously adding more Hydrogen won't get you more living area, because at that point it decreases both dimensions, the thickness and the radius.  The volume peaks at a slightly smaller radius.  Going between radius, mass of the Hydrogen, and thickness is a little bit detailed, but involves the same equations that I posted above, for the case without considering Hydrogen compression.  The volume of the living space is obviously 4 Pi R2 t, where R is the radius and t is the thickness. 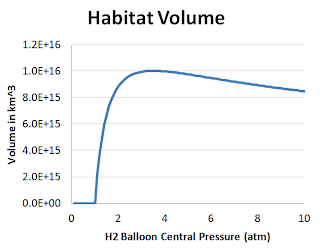 Again, these are all done by the integrator for spherical distributions of gas that I made.  With the above graph, we pinpoint the absolute maximum living space that can be made by this method without rotation.  For the big picture, here is a table of my numbers:

No doubt, this is way larger than Virga.  To illustrate, here is what I'm describing: 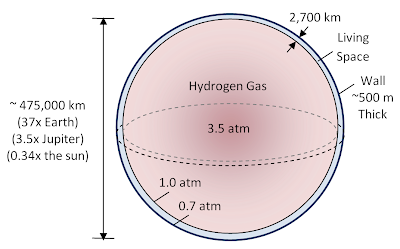 (Hydrogen gas isn't actually red, I couldn't
think of another color to differentiate it)


We have a central bubble of Hydrogen, for which the pressure shifts significantly.  Interestingly, even the density at the center of the Hydrogen bubble isn't quite up to the density of normal air.  Hydrogen spans a range of about 0.08 kg/m3 to 0.3 kg/m3, and air is closer to 1.3 kg/m3.  The parameters here actually match the previous work by Dani Eder surprisingly well.  He said:


If we assume that the bubbleworld is non-rotating, and the living space is at one atmosphere at the gas interface, the gas used is hydrogen, and the gas is at the same temperature as the living space i.e. 300K, then the answer is a sphere about 240,000 km in radius.


That's essentially what I obtained.  The major reason for the difference is probably that he assumed a temperature of 300 Kelvin, while I used 293 Kelvin.  Considering what it takes to get this number, I'm actually surprised that he was able to get this.  However, I think there is a little bit of misspeak in the proposal here:


If we assume that the living space has an average density of 10 kg/m3 (air is 1.2 kg/m3, the balance is people, houses, trees, etc.), then the living space has a limited thickness based on breath-ability. After 2400 km of thickness, the air will be at the equivalent of 3000 m above sea level on Earth, which is about the limit of ordinary breathing with no problems.


The livable portion is about 2,400 km if you use 1.3 kg/m3 as the density, not 10 kg/m3.  Using the former, the thickness comes out to only 300 meters.  However, I think that 10 is a little bit too high for this metric.  The reference tube design I described contributes a mass of only about 2.8 kg/m3, for a total of 4 kg/m3 if you include the air.  I have a hard time imagining a comfortable environment where things are packed more tightly than this.  After all, if you've made a habitat so absurdly huge, you would think that you wouldn't run out of space.  But I guess that's a subject for the sci-fi writers.

The density of the livable portion doesn't affect the calculations for the Hydrogen part, because its boundary condition is 1 atmosphere of pressure either way, and shell theorem prevents any gravitational effects.  However, the density does affect the total mass.  It is also quoted that:


The bubbleworld is too diffuse to hold the atmosphere in by gravity, so an outer shell (steel is handy) is used to keep it in.  It works out to 500 m in thickness.  The total mass of such a world is 3x the Earth's, so there should be enough raw material to build one out of a typical solar system.


You'll get 3x of Earth's mass (of almost this) if you use 10 kg/m3 for the livable area.  But this isn't compatible with the thickness of that area of 2,400 km.  Otherwise, the calculations for the "wall" are the same as mine.  I find about 500 m if you assume a density of lead, which is extremely heavy at 11.34 specific gravity.  If you change this density, it doesn't change the total mass of the construction.

If you return to the assumption of a 1.3 kg/m3 living space density, then the mass is about 1.7x Earth.

It's also not stable, naturally.  You can say that no gravity balloon is stable.. but you would kind of be wrong, unless you're counting the linear to keep the gas inside.  A gravity balloon should have a gas on the inside and a solid as the wall.  As a rock-like substance, the rock has some strength to it.  It's not going to start tumbling due to the presence of microgravity due to a slight displacement from perfect spherical symmetry.  That's because we're dealing with a fluid underneath a solid.  For the Ederworld, we're dealing with a fluid under another fluid.

Fluid-fluid constructions are extremely unstable if not already differentiated.  By that, I mean that the Hydrogen gas is lighter than air, and because of that, it wants to rise to the top.  The air wants to fall to the bottom.  This is an issue, because you have to stabilize the Hydrogen balloon.  Any off-center movement will want to grow, and that will be a big problem.  This construction is so large that you really can't credit much material strength.  However, since the livable space is only a few 1,000 km across at most, it's reasonable that this could be spanned with stabilizing tethers.  This is obvious - stability is never absolutely limiting.  It's only a complicating factor in an engineering sense.

Aside from stability, I was also convinced that tidal forces would be a big problem for a balloon of this size.  I was very convinced of this, but it turns out that I was wrong.  You would have to be within 1 AU of the sun for the tidal forces to approach the surface gravity of this, which is the general metric I would use to set expectations.  It would appear that it could sit in many places in the solar system and still be viable at the stated pressure and size without tidal forces ripping it apart.

Qualifier: This goes into the library of physically viable constructions, but it would take a society far beyond anything that we have ever known on planet Earth.  This is something to "outdo" the Virga design - which is the extreme of a Bubbleworld, which was the starting point for the Ederworld.  The Virga design is vastly beyond what we could hope to do as a society that resembles what we have today.  Even the designs I refer to as "Anahitan" and "Sylvian" are mind-bogglingly massive constructions, and those assume all kinds of shortcuts taken to reduce the needed resources.