This blog describes a concept of rotating tubes for artificial gravity, which are free-floating in a large zero-gravity atmosphere.  Specifically, my reference tube design fits completely inside of a 1 cubic-kilometer cube and could house 22,000 people in a familiar environment.  Obviously, the zero-gravity air environment would need to be much larger than this.

With this population, an obvious question follows: where does the heat go?  My intention is that these tubes will have "windows" on both ends which are open to the environment.  At this scale, no amount of conduction can be relied on, and air flow within zero gravity is notoriously stagnant.  The tube itself isn't zero gravity, so there will naturally be air currents as the inhabitants use energy locally, that heats the air, and that drives currents.  What kind of air flow rate (through the windows) would this drive?  Obviously that depends on the window size.

I previously imagined the window being about 20 meters in diameter, which limits its relative speed to a slow walking pace.  For a test case, consider "lateral flow", where air comes in one window and moves out the other.  Assume 2 kW of power consumption per inhabitant, and allow a 5 degrees Celsius temperature change as the air travels through.  The air speed at the edge of a window will then be 21 miles per hour.  That's a little bit too much.  Because of that, I'm altering the design.  The window will need to be about 40 or 50 meters in diameter.  I use 40 if it's double-flow (air comes in both windows) and 50 if one window is inlet and the other is outlet.  I choose these figures because it minimizes the air speed.  As you increase the diameter of the window, the speed of its edge relative to the zero-gravity atmosphere increases.  However, as you reduce it, the air flowing into the habitat has to be faster.  By making these two components roughly equal, you obtain the universal minimum.


Illustration of Wind Flow into an
Artificial Gravity Tube

With the parameters I've described here, the total wind speed comes out to about 13 miles per hour.  This isn't quite what I was hoping for, but it's still fairly permissive of easy travel into and out of the tubes.  To get more practical, however, it's obvious that what I've described as "lateral flow" won't exactly work.  To get this type of flow, you'll have to power it, but how?  People will be moving in and out constantly.  If you put a large fan there, you'll have to have an air-tight door for them to travel through, all the while avoiding being sucked up by the fan.  This might not sound challenging, but this is almost entirely a zero-gravity atmosphere (the window has about 1/10th Earth gravity).  A person's motion will be dominated almost entirely by the air currents, and not by their footing.  Because of this, it's worth while to compare the general desirability of flow schemes on both a technical and qualitative basis. 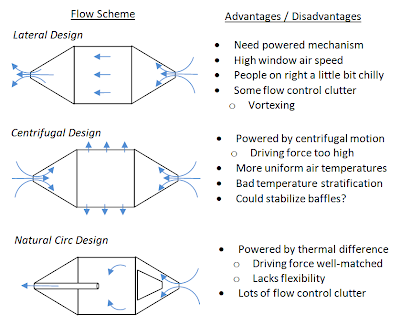 In addition to "lateral flow", I'm also considering "centrifugal flow", where valves on the floor of the habitat allow some air flow through, into the friction buffers area.  It also follows that the friction buffers would have to allow some amount of air flow.  This could have an unrelated benefit of helping to hold the friction buffers into place.  The flow paths might be easy to engineer as well, since they could be macroscopic windows, which could even allow maintenance people to go into them.  This scheme is using the rotating tube as a centrifugal pump essentially, as I've described in prior posts.

Thinking more about the flaw of the first two, I came up with a natural circulation approach that is now my favorite.  Doing the calculations, you will find that the driving force from the centrifugal flow is too much by orders of magnitude.  This can be fixed by piping the flow back to the window of the tube.  With this setup, the flow is powered by the thermal difference of 5 degrees.  Cold air flows down and hot air flows up.  The only challenge is to them corral the hot air to the exit, and make sure the cold air makes it to the surface before going anywhere else.  This would muck up the aesthetics a little bit, to be sure.  The area of flow dividers would be massive.  Nonetheless, the problems of the other schemes seem to outweigh this.

Possibly the largest issue, and the one that concerns me the most, is vortex formation as the air travels from the windows to the surface and back again.  If these are not reduced or eliminated by radial flow dividers, then it could become a fairly bumpy ride.  This is important for intake as well as outtake - since the torque from both must balance each other.  To any degree that it doesn't, that could create big problems.

Numerically, there are several flows of energy at work.  Their relative scales are illustrated below. 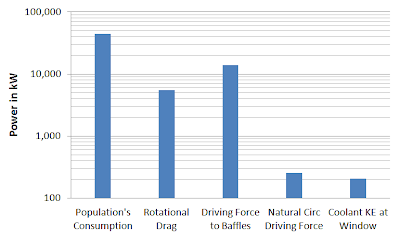 Returning to the last two quantities, it is obvious that natural circulation flow would NOT be sufficient to drive flow at the stated temperature difference.  This is because the effective forms loss coefficient for the entire process would certainly be greater than 1.0.  That means that, in practice, the window would need to be larger than 50 meters across, people would have to consume less power, or a higher change in temperature would have to be accepted.  I have not gone into detail for these calculations, because the above number is still a good ballpark.  It tells me the design is within engineering possibility.  Interestingly, another approach to improve natural circulation would be to make the diameter of the tube larger.  Even if this increased the population by an R^2 factor, it would increase the driving force and the area at the same time, so the total cooling capacity would follow with R^3.

Through this examination, I've established the following claims.

This is an important component of the overall proposal of gravity balloons, because the artificial gravity habitats need to be both economical and desirable.  They certainly seem to be.  Nonetheless, they will be complicated.

The subject of thermal management of these tubes also deserves mention of the analog on Earth: the Stack Effect.  A rotating artificial gravity of a given radius is extremely similar to an Earth building of that height.  Buildings on Earth also have to have HVAC systems, and this resembles one of those very strongly.  The stack effect for buildings on Earth essentially does the same thing that my natural circulation flow scheme does.  But on the other hand, those buildings don't have as many people, and also have more area (of windows and doors and such) exposed to the atmosphere.  So these two cases are similar, but one can't be called easier than the other.