How Far Can Light Travel in an Endless Atmosphere?

The answer to this question was fairly easy to find.  What we're really looking for is the attenuation of visible light in atmosphere.  Then we can use this in order to intelligently discuss how far one could realistically transport light in space habitat with an atmosphere that has larger dimensions than Earth's atmosphere.  With the attenuation factors, we can find distances in order for 50%, 99%, or any given fraction of the original intensity to be absorbed.  Of course, there never comes a point when literally all of the light is absorbed.

This reference (pdf)  gives the attenuation factors for visible light in Earth atmosphere for two kinds of absorption - Raleigh scattering and aerosol reflection. 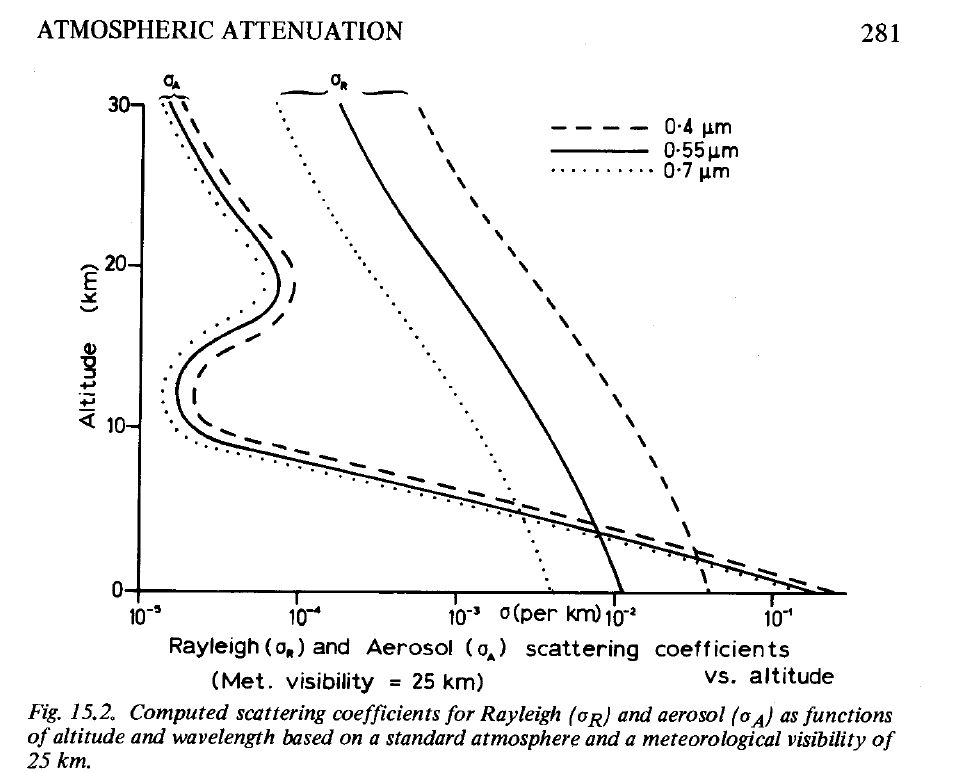 In order to translate this into distances we consider the general exponential form for attenuation:

Where
So to ask "how far before xx % of the light is absorbed", we are querying when I(d)/I_0 is equal to that fraction.  As the reference makes clear, this depends on the composition of the atmosphere, which is a function of height.  We would expect the scattering coefficient to decrease with height just because of decreasing density (there are fewer molecules to scatter off of), but it's clear that aerosols don't just scale with gaseous density.

I eyeballed the above graph to get scattering coefficients at sea-level of about 0.01 1/km for Rayleigh scattering and 0.2 1/km for aerosols.  You can plug these in and solve for d, giving a simple logarithmic expression.  Using these numbers, I plotted the distance light travels for 50% attenuation, 99%, and 99.9%. 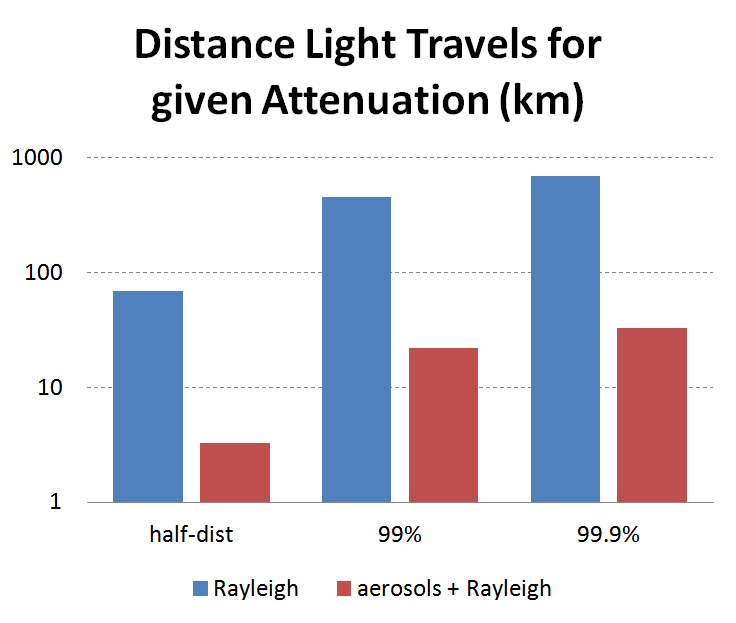 We see that a simple answer to the question at hand is that sizes somewhere between 5 km and 100 km lies the limit of what you can transport light without a significant fraction of it being lost to the atmosphere.

Attenuation of the Sunset on Earth

So for this is all rather intangible.  How does this compare to the sunlight transport on Earth?  The sun isn't always shining through the same distance of atmosphere, which complicates the question.  If the sun is directly overhead we can easily find the mass-thickness of air that stands in-between the surface and the sun.  In fact, you can do that with just the pressure at sea-level.

This comes out to 10.3 tons per cubic meter, which is also very nearly 10 meters of water weight equivalent I discussed in the introduction post.  We can reformulate the attenuation equation to use this number.  With this approach, it can be easily seen that the sun's light directly overhead has <8% loss to attenuation if shining directly over head under any assumption of only Rayleigh scattering.  This assumption makes sense (for simplified calculations) because aerosols are only significant in a relatively small altitude range near sea-level.

For the limit case of sunset/sunrise it's a bit more difficult.  To get a number, I'm using a simplified model where I assume constant density of the atmosphere to get a false "edge" to it.  Then using basic geometry I find the distance from the line of sight to this edge, and then the attenuation at that point can be assessed. 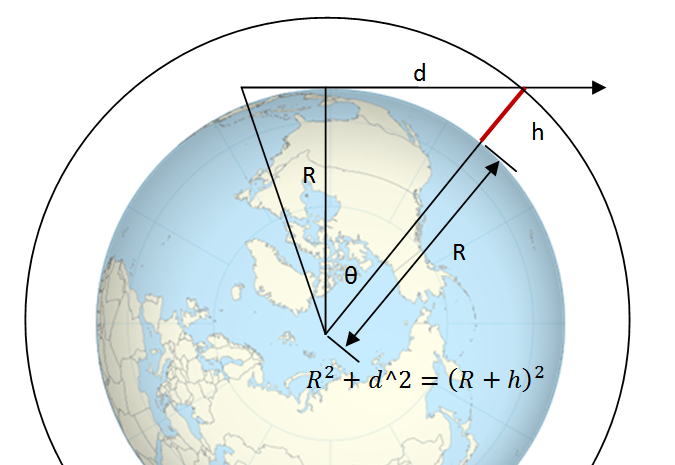 Leads to these calculations:
This number can then be applied to the prior equations to find that using only the Rayleigh scattering coefficient, only 4% of the light makes it through - this is why you can look directly at the sun at sunset.  However, using the sea-level aerosol scattering coefficient a negligible amount of light makes it through, showing that is a bad assumption.  Indeed, the amount of aerosols in the higher levels of the atmosphere is extremely little in comparison.  In reality, the amount of light in the sunset may be a little less than 4%, but obviously not functionally zero.

Implications for the Gravity Balloon

For the reference sizes I've been discussing so far, it's clear that atmospheric attenuation wouldn't be a deal-breaker, since even the largest size didn't reach 100 km in any given dimension.  The sunset on Earth demonstrates that light can make it through >300 km, although there is a large distortion of the colors in that event.  The "effective" depth of the atmosphere that the sun shines through at noon on the equator is about 9 km.  This would be compariable to the distances we would see in an access tunnel, aside from the fact that light would have to pass through the airlocks as well.  This would be a very difficult engineering task.

The results also indicate that the air composition in a gravity ballon couldn't be identical to sea-level air on Earth and still transmit significant light because of aerosols.  Perhaps aerosol content could be controlled so this wouldn't be a problem.

In a later post I hope to give some mention to how it would actually look to transport light in such large volumes, and what "feel" this would lead to.