Calculation of power dissipated from the spinning artificial gravity tubes is important because it sets a clear limit on feasibility.  Here, I will only go into the case of the limit of laminar flow, and the details of the construction required to keep the flow laminar.  As touched on in the introduction, this could be accomplished by a series of concentric sheets around the cylinder.  I found that the total number of sheets needed decreases as you decrease the width of the friction buffer, but the power dissipation increases.  This summarizes the major tradeoff of the method.

This isn't a perfectly correct summation of the situation, because in real life it's likely that anyone building this would take advantage of so much extra space by custom designing stages that use either the transition or turbulent flow regimes.  Doing so would allow one to keep the combination of power requirement and stage numbers lower than the limit described here, but so far this is out of the scope of what I can address.

Classification as a Fluid Flow Problem

The case of spinning artificial gravity tubes within a gravity balloon demonstrate a case of Taylor-Couette flow in the large-limit.  This is basically equivalent of two infinite planes moving relative to each other, which is Couette flow.  This is similar to the case of planar fluid flow, although different. 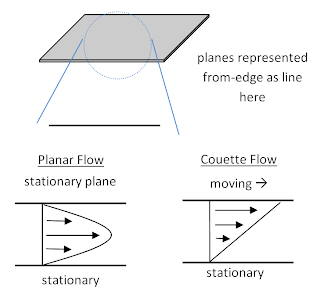 The definition of Reynolds numbers for any type of flow is at least somewhat arbitrary, since when you require a length scale, you have to pick something to use for that.  In the plane-sliding case of Couette flow, the obvious definition is the distance between plates.  There seems to be a good case that the transition to laminar then happens somewhere around number of 300, and there are even some cool youtube videos of this.  For the intent of keeping the flow laminar, we would require the number be lower than this.  Here, the denominator nu is the kinematic viscosity.

In the case of laminar flow, the sheer stress acting between the plates follows almost from the definition of viscosity itself.  This reference has a good illustration for how to think about it.

There's an important conclusion that can be draw from the collection of terms here.  Since the fraction has velocity divided by separation distance, that fraction won't be affected by the number of stages.  That implies that, provided the flow is laminar, it doesn't matter how many stages you use.  What that really implies is that you would use the minimum number of stages to make the flow laminar.  Take the number of stages to be N, and the total width of the friction buffer to be D=Nd.  Then, take the relative velocity in a single stage to be v, for which we know v=V/N.  That means that the sheer stress can be stated using the properties for the entire friction buffer, irrespective of number of stages.  Here, μ (mu) is the dynamic viscosity.

The only thing missing at this point is relative speed of the entire rotating cylinder.  That's not a single number, since it grows with radius.  In the 2 rotation per minute case, the cylinder is 500 meters in diameter, which gives a good minimum size to use for calculations.  In that case, for 9.8 m/s^2, the edge moves at a speed of about 50 meters per second.  For that case, the following is the number of stages and power dissipation for different buffer widths.


Tradeoff between Number of Stages and
Power Dissipation 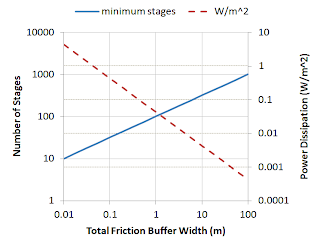 This is confusing graph, so I'll highlight some specific data points here.
So, speaking about design point, we would imagine a major cost associated with building 100s of stages or with managing separation distances between stages of less than a centimeter.  A power dissipation of several watts per square meter would still only come out to roughly a light-bulb of power use per person for any reasonably suburban density.  I could be wrong on the cost of any of these points, so I admit this is fairly arbitrary.

None of this would be very useful is the entire thing wasn't build-able in the first place.  There still remain some valid questions in this area.  Since we're talking about generic flow separators in zero gravity, it's possible that it could be made with very little material or careful concern.  I like to imagine a material being used like Saran Wrap.  If it was much more than this, you could imagine making 100 super large cylinders of it could be too costly.  But if we imagine that the flow separators have no particular strength to speak of, then could they be kept from bumping and falling apart?  Firstly, I imagine that a differential pressure would have to be maintained between each stage, so that they maintain their shape.  But even if the stages maintain their shape well, could they be prevented from bumping with a small amount of wobble or disturbance?  I would like to think it could, and I think that even simple demonstrations in a lab could show this, but it's still an open question.  Particularly, with several concentric wheels, the coupling could lead to all kinds of concerns with growing oscillations.

The Effect of Air Pressure

Not just in this area, but in several components of the gravity balloon, adjustment of air pressure can make a major difference in the calculations, and possibly for the better.  Obviously decreasing air pressure will decrease the power dissipated by air friction.  To some extent this may be desirable.

What just what kind of air composition is appropriate?  The Gemini and Apollo missions are frequently cited cases that demonstrates the danger of using a full Oxygen atmosphere.  For large-scale and long-term habitation, I would be worried about this in addition to the biological needs of plants and animals.  In a short-term experiment, it's perfectly obvious that humans and many other species can survive just fine in an altered atmosphere, but the long-term effects are unstudied by their very nature.

There's also the concern that if a high pressure asteroid is used with the intent to scale up, the management of the friction buffer will increase in difficulty.  It also increases with difficulty with larger structures, and here I mostly talked about the easiest case.