I have been long-overdue to share even some of the most basic thoughts I've had regarding specifics of the configuration of the friction buffers. To recap some basics, this blog describes open-air rotating tubes to create artificial gravity. The ends are pinched (to perhaps 1/8th or 1/10th the surface radius) with air flowing freely through the inlet and exits (aside from flow control clutter I've written about). The rotation can be maintained at a low energetic cost by multiple layers of sheets surrounding the tube.

Problems only become glaringly apparent when you combine all of these construction elements into a single package, and realize a component which was helpful in one respect is messing up the design in another respect that was hard to imagine. In particular here, I have in mind the combination of 1) the taper and 2) the friction buffer layers. The obvious conception is that the friction buffers (just like the ground itself) tapers up toward the opening. But this comes with hazards.

I don't mean to claim this is the only engineering problem within this general topic. However, I also want to stress that I see none of these inflicting anything close to a mortal wound. They are, for the most part, problems with foreseeable workarounds. I only intend to articulate how these workarounds constrain the design space. I will have to start by naming the problems in the first place


The inside air of a tube falls with radius from the center-line. This is true for any rotating artificial gravity habitat. The point I want to stress here is that we also have to think of this in the context of the friction buffers.

Let me get one thing straight - the relative rotation speeds of the friction buffers are dictated by the fluid mechanics. For complex geometries, you can't even predict this perfectly in advance.

Now if the air is falling in pressure because it is rotating inside the tube, then it is also clearly rotating between the friction buffers, but at a staged rate. So the math is different, but there's still a pressure gradient - and pressure falls as radius increases. Carry this to its logical conclusion and you'll arrive at a contradiction. Walk from the center-line to the outermost friction buffer, and the pressure goes down over the entire trip. But the center-line must be the same pressure you started with. The discrepancy is because the tube will act like a centrifugal pump if you let it. Our intent is to avoid that by implementing a barrier to the flow somewhere (as an absolute necessity).


This is the most critical and most interesting problem to me. It's also hard to explain. Start out the outer surface of the outermost layer of the friction buffers. The pressure drops as you go to lower radius. But (and here's the kicker), as you climb the taper at the end, the rotation rate drops too.

Firstly, this presents a problem that you will have trouble maintaining a positive pressure compared to the ambient atmosphere as you climb toward the end opening. Secondly, it means that the problem repeats itself for each layer of friction buffer compared to the next.

Why is this a problem? Consider a balloon (no word tricks here, a literal balloon). It has a positive pressure, and it maintains its shape because of that pressure. If some part of the balloon transitions to a negative pressure, what happens? That parts caves in on itself. That's the problem we are dealing with in the taper regions.

Solutions:
I know this is getting hard to visualize. Here is a token attempt to sketch it. (please ignore the lines in the upper right, it's just too late to edit them out right now) 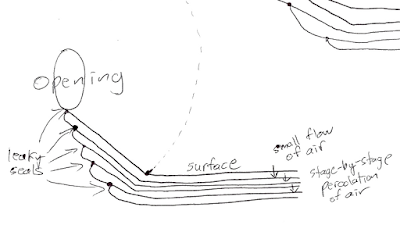 It's hard to keep in mind the speeds when you look at this. All friction buffers have about the same speed difference relative to its neighbor, and the outermost sheet is almost stationary relative to the ambient air. So this does not introduce any extraordinary speeds, because while the innermost sheet is moving fast, the taper brings it down to a manageable speed.


This is the most obvious of all - the connection between the sheets is a moving seal over a long distance, and this can easily get expensive. Solutions:
Points #2 and #3 are mostly complementary.