Stability remains an issue - it is one of the core weaknesses of the proposition for the gravity balloon concept. The issue isn't whether the fundamental principle of laminarization will work, or even necessarily that the channel flow physics are suitable for this problem, but the behavior of a complex and fairly high-energy system.

If you took a simplistic picture of the wedge effect, the prediction would be a slight restorative force for each layer of the friction buffers. The exact directionality of this force gets complicated. It gets even more complicated by the non-rigid nature of the buffers. What we should really raise our eyebrows at, however, is what happens when you consider all the numerous sheets in tandem. Loosely connected dynamic systems can be prone to failure, and this situation seems like a candidate for that. But then again, maybe not. The solution becomes fairly non-trivial.

Due to the complexity of the problem, our only best option left is to perform scaled experiments. Ideally, we would like to use a fluid that is more convenient, in that the same flow patterns can be produced at a smaller scale. To do this, we will look at the Reynold's number.

We would like something with a high density and a low viscosity (in particular, relative to air). It becomes fairly obvious that water is our best option for this. Also, you can see that we have 2 dimensions over which to flex our abilities - that is the velocity and the distance metric. Now it seems pretty clear that we want the smallest structure that we can spin at workable speeds.

These 2 degrees of freedom would still dictate a massive scale of experiment, if taken to apply to the entire system all at once. By that, you can say that d is the diameter of the outer-most friction buffer (for example), and that the system will be a scaled model in terms of all geometric dimensions. The enormous cost of this nudges us to seek cheaper solutions that might go 80% of the way with 20% of the effort. In a more accurate accounting, I'm looking for something more like 10% of the ultimate discoveries with 0.001% of the effort.

Obviously, we might instead take d to measure the distance between sheets, while also relaxing the requirement for strict geometric similarity. This might be nice in order to make something testable by reducing the number of sheets compared to the gravity balloon reference design. Thus, the overall scale and velocities will be dramatically less, while still demonstrating channel-to-channel interactions with the same flow patterns.

This still won't be sufficient to make an immediately tenable experiment. We'll need to relax something related to the channel flow pattern itself. The obvious candidate is to change the channel width relative to the overall tube diameter. However, I will not count this as an independent variable, because I think that (for most cases) it will fall out of the selection of the number of sheets. In any format you choose, it's likely that the ratio of the overall thickness of the friction buffer region will be about 50% of the tube radius. So greater channel width will follow with fewer sheets.

Our hypothetical experiment has been cut-and-slashed a lot by this point, but we're not finished yet! What is truly the really important point? What would we want to learn from this? I would argue that it is the interaction of multiple friction buffers in a (generally sufficiently) turbulent flow regime. Even if you cut that out, there's still some value because it answers some questions about this broader notion of friction buffers (which can even have other applications). However, we do want to answer questions about the friction buffers used in a gravity balloon regarding their stability. We basically know that the answer will be different for laminar and turbulent (or at least somewhat independent). Let me illustrate my thinking in a sketch. 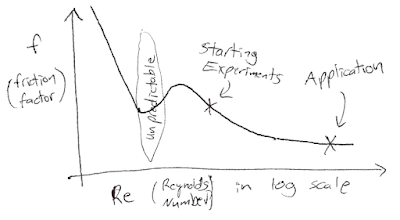 Basically, we want to probe on the minimum edge of turbulent flow regimes with a multi-sheet friction buffer system. Just opt for an outright change of Reynolds number according to the abilities available for experimentation. This would be the 10% of ultimate knowledge I'm interested in. This would set the stage for everything that may (or may not) come in the future.

The good news - all this slashing of the metrics gets our experiment size way down (the scale is highly sensitive to Reynolds number). And that gives us some wiggle room. With lower Reynolds number, we can play around with more sheets (even up to 10 or 16 as I'm dreamed about), while staying at least in the turbulent regime. With the same general equipment, dial the numbers the other direction, and see about higher Reynolds number channels with fewer sheets.

Once you start chewing on this, something new starts to take form - a general format of the development path. Because as these numbers are dialed back up to the full scale (with more resources), its possible to speculate when many different components of the design will be proven in principle. After that, you can image at what point those components will mature into a representative suite of technologies. For instance, at certain numbers, the intra-sheet flow management will become testable. At another point later on, active controls for maintaining the seals could be strapped on.

So now we've covered 4 (mostly) independent factors. I think this is probably the right way to look at scaling of real, physical, experiments. These can start on a household scale.