The "Taper-Zero" Design for Friction Buffer Tapering and Pressurizing

Gravity balloons, with friction buffers to allow artificial gravity inside them, have so-far had one major design aspect missing. There are a few reasons for this. Partly, it was an non-intuitive problem, and every time I returned to it, I started out going down the wrong track with a careless sign error somewhere in there. Another reason is that it's genuinely a hard problem. But the main reason it has taken me so long to present a full solution is because I didn't want to accept what the math was telling me. Up until this point, I have always wanted to imagine the friction buffer sheets as something with a zero-thickness limit - something that could be literal paper, aluminum foil, or some other absurdly thin material. This was unrealistic and didn't fit with the other basic realities of the turbulent reference design parameters. I also resisted a 2nd obvious design decision, which was to have the moving seals connect sheet-to-sheet as opposed to sheet-to-center-line-structure. I may go into those trains of thought, but in this post I mainly want to communicate the bare minimum to lay out this design.

The problem is how to "terminate" the friction buffer sheets. For the bulk of an artificial gravity tube, there is radial symmetry, so the problem is relatively easy to envision. The fluid flow between sheets is very nearly approximately a parallel sheet flow problem. The basic mechanism to reduce friction is flushed out in the radially symmetric form. Intuitively, it seems "messy" to picture how the sheets pinch at the end, similar to the tube itself. No matter what specifics you opt for, this also introduces a moving seal, at which point an engineer may think "yuck", but still accept that there's no choice but to deal with some seals. We take comfort in the fact that, while the seal length is large, it is at low speeds and low pressures. The problem that really blows down the house of cards is the realization that, as the sheet pinches to the contact point, the air pressure in its volume decreases - and that different layers decrease at different gradients.

I've summed up some details of this problem space in the last post and at other times in this blog. So here I want to jump right into the solution space.


A design solution starts by holding something specific constant, and then fills in the rest of the values from there. I will name the different solutions according to that assumption. The first intuition I had was to terminate all friction buffer sheets very close to the tube's end opening, which I will call the taper-center design. This is still a possible solution, but I believe it's inferior due to the complications of making the seal act between the flexible sheet and the stationary connection point around the tube ending.

As I came to better understand that the pressure distribution within the friction buffer region would be a problem (at all), my natural intuition was to imagine that there is no pressure difference over the radially symmetric part of any of the friction buffers. I would call this the sheet-isobaric solution method. This start with the assumption that we will preserve the "no strength" requirement for the sheets, and figures out where to go from there. The problem comes when you pinch in toward the end opening - even the slightest bit. The pressure drops as you decrease radius, but the real kicker is the fact that pressure drops (a) below micro-gravity ambient and (b) faster for the innermost sheets. This means that in the taper region the sheets will be "sucked" in towards the tubes. Combating this would require complex, rigid, and moving parts. I hate all 3 of those adjectives! The fact that the sheets can't passively maintain their shape if they don't have a positive pressure is what I will call the convexity-constraint. How often do you see a balloon with sharply convex shapes? Never, exactly. Now, the balloon notion here is different from that of the overall gravity balloon. But for simplicity of operation, we all but demand that the friction buffers act sort-of like a balloon so that they don't need rigid members. Moving on, why does this constraint create any problems? Why do we need to taper (pinch at the end) the sheets at all? Why can't we just terminate them against a rigid structure at the radius they start out at? Because that would demand a moving seal at > 100 mph, and defeat most of the purpose of the friction buffers in the first place. This is what I will call the velocity-constraint.

Maybe we can come to something of a compromise here, and now we arrive in a design space that I found to be a large bit of a pitfall myself. I imagined the sheets terminating against a rigid structure that fanned out from the end opening. This increases the radius in a graded system, and thus largely avoids the velocity-constraint. I might call this the center-graded deign, and it has some neat properties, but those properties wound up being largely irrelevant to the problem. These configurations just couldn't save us from the convexity-constraint. By connecting to a seal with a rigid structure at low radius / low velocity, you are still going to run into that sucking problem and have to use a massively expensive system to partially pin the moving sheet to the rigid structure. I struggled in this logical knot, trying to somehow make the pressure gradient turn around in my mind. Alas, when you rotate stuff, it wants to fling outward. Fighting that is a fool's errand, and tension is better than compression by 10x factor or greater.

So let's move on to accept taper-zero hypothesis and design. The cold logical facts are telling us that the friction buffer sheets (1) are concave geometries (2) must have positive pressure compared to ambient and (3) must have positive pressure relative to the next outer-most sheet. This is a mouthful, it is weird, and it sacrifices some of the most beloved assumptions up until this point. I believe there is a logical train of thought directly from these principles (hard-fought conclusions from the previous failed design spaces), and I will probably not do that train of thought justice here, and I will be skipping some. But the final insight is pretty cool.


A combination of two, and somewhat a 3rd one, factors suggests that we don't connect the sheets (moving joint) to a rigid structure, but instead to each other. Those are the convexity-constraint and the velocity-constraint together. We want the outer sheet to connect at large radius (velocity, combined subtly with a desire to keep strength requirements low), but we also want to keep the friction buffers "puffy". We wind up with a vision of one puff puffed out on the outside of another puff. Now, for pressure, this suggests that the connection between the puffs is just a little bit higher than ambient. This directly suggests what the pressure of each stage will be like (assuming you have values of radii for connection points, which you can just get directly from the velocity constraint).


Each sheet connects at a different radius - smaller radius for the innermost sheet, and large radius for the outermost sheet. The exact picking of connection points can be engineered to your own desire. Here, I'm going to be using the velocity constraint to have all sheets move at the end-opening speed at their connection point. I'm using 10 sheets in this reference design, because 16 (a previous benchmark) is just too labor intensive to illustrate.

These sheets will actually have a pressure at some minuscule value over ambient at the seals, and they will be constantly leaking air (I'll talk more about this later). Additionally, there will be no complicated system maintaining the pressure and position. Instead, the 2 ends of the friction buffer sheet will have a simple remote-controlled tensioner unit which can increase or decrease the clearance distance (thus impacting the leak rate and the pressure).

Start from the seal, and move outward toward the center of the channel in the radially symmetric portion of its geometry. The pressure increases, depending on how fast that stage is rotating. The ultimate pressure in the channel is almost entirely a consequence of the rotation speed of the stage. Next, observe that inside of the channel there is some radial pressure gradient, but the sheet is also holding back some amount of air pressure as well.

I don't know if this fully illustrates it, but it is an attempt. This graph is telling the story for each stage, going from the connecting point (venting air to atmosphere) to the channel interior. 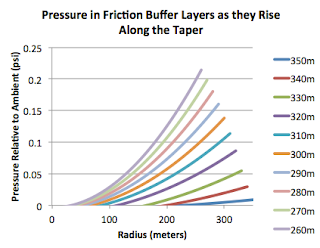 Next, let's look at the profile as you increase radius from the center-line in the center of the tube. You can't literally traverse this path, and this is just an illustration. The tube itself has a pressure increase from ambient, dictated by its rotation. The innermost friction buffers mostly inherit these same numbers. 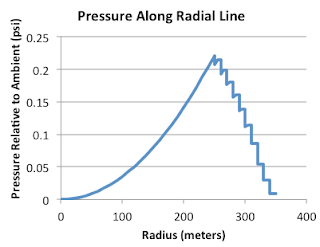 The big point I want to make here is that the friction buffer sheets are fighting the radial gradient of air pressure. In the 2nd graph, you can also make note that the saw-tooth looks different. The "step" part of it has a slope to it that the outer layers don't share. This is because the inner layers are rotating faster. That shows the presence of a strong radial air pressure gradient toward the inner-most layers compared to the outer layers that are most stationary.


The floor of the artificial gravity tube, and the sheets themselves, would have holes in them. Not a huge number - there is no obvious lower limit. The inner layers would have more holes than the outer layers, because air must flow through them all to get to the outer layer while ever layer loses about the same amount to leakage.

In this scheme, while the air flow percolating through the layers can be actively controlled, it is not necessary. It would be more simple and still effective to just operate the tensions that control the leak rate along the seals, and these would be tremendously simple seals.

In retrospect, abandoning the dream of zero-strength requirement sheets bought us a lot. It's that simplicity that I see coalescing the design where someone can put their foot down and say "yes, this all is consistent and coherent now". I still see possible improvements to this, but the important thing to note is that I see them all starting from this design as a template.

What's left to do? I need to revisit the impact of elasticity. It was never really an issue before now, but with the sheets holding back some quantity of air pressure, it will be relevant again. Trickier - it may change as the rotation rate changes. That demands some extra engineering of the seal actuation during spin-up and spin-down. Nothing crazy, I can already mentally picture a lot of the specifics. It's likely that the tube would have auxiliary compressors that will intentionally inflate the friction buffers while the tube is not yet rotating. Predictable movements in this phase of spin-up will give confidence to begin rotating the entire tube.